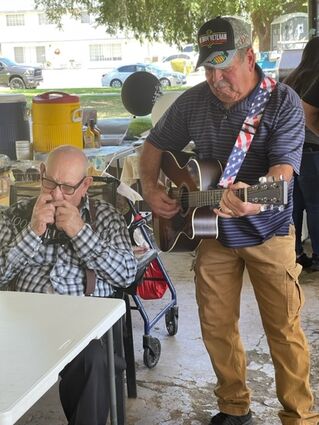 Pedro Treviño Gutierrez celebrated his 100th birthday surrounded by family and friends. It was a festive occasion that honored his life for being a loving brother, uncle, father, grandfather, and great-grandfather.

"I have lived a long and fruitful life and have been blessed with 12 children. Today I am happy to see everyone that came to wish me a happy birthday," said Treviño Gutierrez.

"Thanks to God, I have never gotten sick. I don't know what an operation is. I still feel healthy at this age."

Treviño Gutierrez was born in 1922 in Mercedes, Texas, and raised in Burgos, Tamaulipas, Mexico. As a youth, he helped tend to the family ranch and herded sheep.

He came to Wasco with his family in 1964, where he worked as a field laborer until he retired in his 70s. After that, he kept working in landscaping.

He is one of 10 siblings and the only one still living. He grew up poor and went to school only until the third grade. He knew English well and learned it on his own.

Treviño Gutierrez had many hobbies, some that he still practices to this day. Fluent in carpentry, he made dog and birdhouses to sell. He also played the accordion and harmonica in church.

For fun, he liked to take his children to Pismo Beach. They would go three times a year.

All of his life, he has been a man of God. In Wasco, he attended a Pentecostal church every Sunday and Wednesday. He was protective of his children and taught them the love of Christ to keep them out of trouble.

His daughter, Juanita Gutierrez, remembers working in the fields with him on weekends and during the summer, instilling in them the strength to accomplish their goals.

He taught his children to respect their elders and be humble. He has loved all of his children unconditionally.

"My father was always there and is still there to this date if I needed him," said his son, Jose Luis Gutierrez.

He worked hard to care for his large family.

This was difficult to do with one income, but he did it. He always made sure his family had everything they needed.

"My father has worked all of his life. At a young age, his father, who was 32 at the time, was murdered, so he grew up mostly on his own. He traveled to different states in the United States to make money to send to his mother," said one of his daughters, Gloria Martinez.

Treviño Gutierrez was very creative and built things. He could fix cars, lawnmowers and fences.

"He was a handyman," said daughter Carmen Martinez.

At the event, he was serenaded by the musical group Los Burgeños.

Over 150 people attended the celebration from as far as Sacramento, Madera, Gilroy, Hollister and Chowchilla.

Melissa Martinez said, "He is the best grandfather ever. I am who I am today because of him. What I have passed on to my children, I learned from him. He is a holy man, and I have always looked up to him."

His nephew, David "Sonny" Benavidez, said he was a good example to him.

"Since I was a child, he always talked to us about being a better person and knowing that there was a God watching over us." 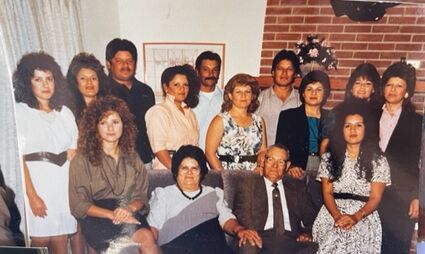 Pedro Treviño Gutierrez with his wife, Josefa, and their 12 children.

Surrounded by his loved ones, he is grateful for the affection they showered upon him on his special day.

Of his party, he said, "I am happy that all of my family is here with me."

He added, "Hopefully, I will live to 105 years old like my grandmother."