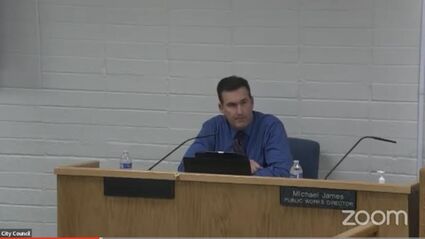 Public Works Director Michael James speaks to the council about the Kern County Groundwater Authority and the city's withdrawal from it.

The Shafter City Council approved a motion to have City Manager Gabriel Gonzales send a 30- day notice to the Kern County Groundwater Authority announcing the withdrawal of the City of Shafter from the organization.

There were discussions last week between Mayor Pro-Tem Chad Givens, Councilmember Pete Espinoza and Gonzalez about the withdrawal. "Withdrawing from the Groundwater Authority would mean about $30,000 that we could use for other water projects and needs of the city," Public Works Director Michael James said .

Givens said, "We currently are not in control of the water that we have, having to get approval from the committee on a plan. We need to have control of our own water that we have, and how to use it, instead of being controlled by members who do not reside in our area and may not know our situation and needs."

The Kern Groundwater Authority was formed in 2014, when the state legislature passed the Sustainable Groundwater Management Act, which mandates that groundwater basins designated by Department of Water Resources as high or medium priority develop groundwater sustainability plans.

Shafter has been a paying member of the organization since its inception. However, Shafter is now the only city remaining in the agency, with other member agencies being water districts, including the Shafter-Wasco Irrigation District, the West Kern Water District and the North Kern Water District.

"We have had very good relations with the North Kern Water District and SWID in the past, and will continue to work with them to address our water needs.

In other council action, a new pavement striping machine was approved for $14,600 from Roadline, Inc. They also approved the acceptance of a new zoning map for the city, approving Ordinance 740, which reflects zoning changes made in the past two years. There was also an approval to begin to accept bids for the 2022 Park Lighting Project, which will provide new lighting for our city parks.