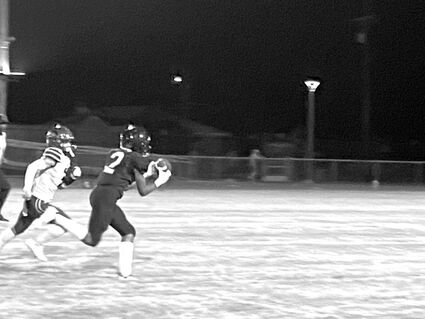 Mariyon Sloane makes a catch for a touchdown.

The Shafter High Generals suffered their first loss of the season on Friday night, dropping a heartbreaker to Chavez High, 35-34, after leading for most of the game.

Early in the game, neither team could mount an effective drive, with the teams trading punts. Chavez drew first blood late in the first quarter when they scored on a 28-yard touchdown play. Shafter went without even a first down for the first quarter, getting hurt by missed blocking assignments and penalties.

The Generals evened the score at the beginning of the second quarter when quarterback Ezekiel Osborne connected on a 38-yard pass to Jesse Bernal. This was followed up by a 40-yard touchdown run by Koa Rhodes, who returned this week from a knee injury suffered two weeks ago.

Rhodes would end the game with 171 yards and three rushing touchdowns. Shafter added two more scores in the second quarter, when Rhodes scored on a 15-yard run and a touchdown pass to Jesus Vasquez, giving the Generals a 21-7 lead. Looking to put the game out of reach, the Generals missed two opportunities to add to their lead late in the second quarter. The Generals were in the red zone, with the ball on the Chavez 12-yard line, when they were hit with a penalty that pushed the ball back, followed by a sack of Osborne that put them at the 26 yard line. The Generals missed a 36-yard field goal attempt, giving the ball back to the Titans.

With under three minutes to go in the half, the Generals seemed to be on their way to widen their lead with the ball inside the Titans' 20-yard line again. But Osborne was picked off on a pass play, and the interception was returned for a touchdown, resulting in a tie score, instead of a bigger lead for the Generals.

In the second half, the Generals' defense played their worst half of the season, not able to stop the Titans on their drives. The Titans scored on three straight drives in the second half, taking the lead with 4:32 to go in the game on a 2-yard touchdown run.

Shafter answered after the score, driving the ball 74 yards on eight plays, scoring on a 13-yard touchdown pass from Osborne to Mariyon Sloane with 1:25 to play. Coach Pierucci decided to try for the two-point conversion instead of kicking. Osborne ran to his left, looking for an open receiver, but was caught in the backfield and sacked.

Chavez took a knee to end the game, giving the Generals their first loss on their newly renovated stadium.

When asked about the decision to go for the two points, Pierucci said, "Well, to be honest with you, we weren't stopping anybody. So just at that moment, I think that they had scored on their last two series, so for us it was one of those things where I think both teams were exhausted. So let's try to put in a two-point play that we practice all the time. And it didn't work." 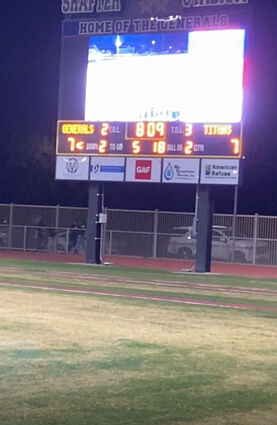 The Generals will look to get back on the winning track on Friday night when they celebrate their Homecoming Night against the Taft Wildcats. The game also will have the crowning of the King and Queen and their court, with the floats from each class.

There also will be grand opening festivities for the new stadium, with a video created by Coach Pierucci and his team of students, as well as a variety of Shafter High memorabilia on sale, including old yearbooks, clothing and other nostalgic items. The junior varsity game will begin at 5 p.m., with the varsity kicking off at 7:30 p.m.