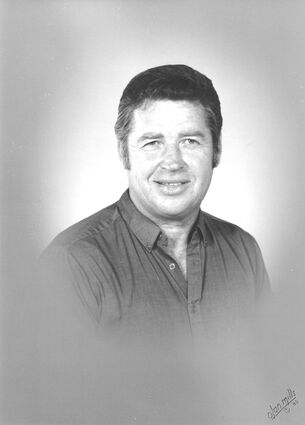 Jerry Lynn Lauderdale was born May 4, 1939, in Wayne, Okla., to Carol and Pauline Lauderdale. He is preceded in death by his wife, Arneda Sue Lauderdale, and his three siblings, Shirley Foster, Richard Lauderdale and Dennis Lauderdale.

Jerry attended and graduated from Shafter High School in 1957. While in high school he was not only a good student but a great athlete, receiving numerous awards in football, basketball and track. He married Arneda Sue Sherrell in 1960 and became a father to Tamarah Lyn Harber-Pickens in November of 1960, and Jeffrey Wayne Lauderdale in December of 1962.

He loved his wife and children. He was Jeff's coach in baseball for more years than he wasn't, and he never missed a Shafter High football game that his son played, and Tammy cheered at as head cheerleader. He was always proud of Tammy and Jeff's accomplishments in school, career and family.

He became a grandfather in 1985 when Tyler Martens was born. More grandchildren followed: Mitchell Martens, Natalie Martens, Zoeё Harber and Nick Harber, who are Tamarah's children, and Jacob Lauderdale and Joshua Lauderdale, who are Jeff's children. He loved all of his grandchildren and was very proud of their families and successes.

He always had a soft spot for his sisters and brothers in law, his nieces and nephews, and spoke of them often.

Jerry was saved in the Shafter Free Will Baptist in 1975 and was a faithful member until he was unable to attend services beginning in 2015. While attending the Shafter Free Will Baptist Church he was very involved. He worked tirelessly on the actual building of the church, working evenings and weekends for a period of 6 to 9 months. He was very proud to have been able to see the existing church building constructed.

His favorite calling was as a 5th-6th grade boys Sunday School teacher. He loved teaching young people about the Lord. He also team-taught the teenagers with his son, Jeff, and enjoyed it very much. Jerry was a member of the Trustee Board and served as treasurer and assistant treasurer for many years. He was a very faithful servant of our Lord.

Jerry had many wonderful jobs, from working for Convair out of Vandenburgh Air Force Base in Lompoc, to selling cars for Ford in Shafter, to working for a few different fertilizer companies, until he found the job where he would work the majority of his life, at Bear Creek Production Co. (originally Jackson & Perkins Roses).

He enjoyed the growing, prepping and packaging of rose bushes that were sold all over the US. He knew most of the plants by name when seeing their blooms. He supervised in the Technical Services Department, where he held a PCA license for chemical use and reporting. He had many friends at Bear Creek.

After 25 years and a change in management, he began working for Tri Cal, where he managed the application of methyl bromide into the soil of farmland to eradicate fungal spores. He loved this job and really enjoyed working with Clyde.

While working at Tri Cal, Jerry lost his wife, Arneda, to lupus. She was the fuel behind Jerry's willingness to go places. After she passed away, he just lost the desire to really go anywhere, but did love visits from family (especially grandchildren). He lived for a year with his daughter, Tamarah and her family. He then moved into an apartment by himself but was very lonely, so he moved in with his son, Jeff, and his family before moving into Rosewood Senior Living, where he lived until the last year of his life.

At first while living at Rosewood, he enjoyed the company of many residents and played cards and pool with many of them; however, he began leaving his room less and less as his health deteriorated. Through each move, his family, especially his grandsons, came together and took care of his moving needs. Jacob, his third grandson, took over buying the groceries and weekly visits when Jeff moved to Oklahoma. Jerry always appreciated Jacob's dedication.

He, of course, loved football, especially the USC Trojans, 49ers and the Green Bay Packers, but his absolute passion was the Los Angeles Dodgers. His favorite phrase when talking about the Dodgers was, "It's time for Dodger baseball." He hit a home run in life and love and is enjoying the greatest grand slam ever in heaven with our Lord Jesus and the love of his life, Arneda.

A funeral service will be held at Peters Funeral Home on Sept. 28, 2022, beginning at 10 a.m., and Committal Prayer will follow at Shafter Memorial Park.