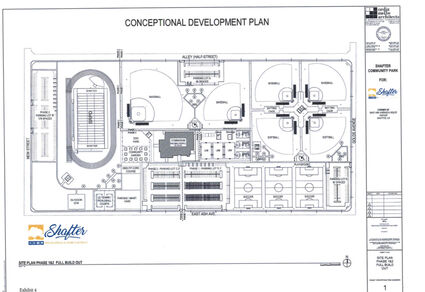 This map details the plans for the new Community Park project.

The park is to be built in two phases, and when completed, the park would include a 28,000 square foot gymnasium, tennis/pickleball courts, basketball courts, a dog park, office buildings, and a concession stand. This project is being led by Shafter Recreation and Parks District Manager Philip Jimenez, who has been working with his board for years to get the project moved forward.

The project is state funded. To be approved, the area had to be changed from being a commercial zone to a public area zone. This change was also approved Tuesday night.

Wiebe said that they will be having a lunch open to the public on Oct. 9 at the Shafter Mennonite Brethren Church on Kern Street. There will be information there detailing plans for the project, what they are planning to do to get the project completed, as well as an opportunity to help the cause with a donation.

Bergen said that the items at the thrift store would be items donated by the community. They would include household items, clothing, toys, sporting goods and more. She assured the council that the store would be a clean and friendly place where communitymembers could gather to buy quality items at a large discount. Bergen and Wiebe got the idea for the store from the success of the Shafter Christmas Store, which allows parents to buy toys for their children at a big discount around the holidays.