An enchanting night of Wine and Roses 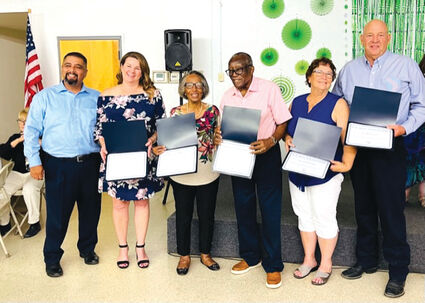 Grand Marshalls Tilo and Jeni Cortez, Deloris and Roger Harrison, and Tim and Karen Holtermann with their certificates of recognition they received from the City of Wasco.

The Wasco Elk Ladies hosted "An Evening of Wine and Roses" on Sept. 9 as part of the Rose Festival activities. It was an honored guest reception as a tribute to the 2022 Grand Marshals, Miss Wasco Rose Queen Ensley Mehlberg and, posthumously, featured artist Helen Howard.

This year's Grand Marshals were Tilo and Jeni Cortez, Roger and Deloris Harrison and Tim and Karen Holtermann. At the event, Mayor Gilberto Reyna awarded them a key to the city.

"I am delighted with the people selected to be this year's Wasco Rose Parade Grand Marshals; they all significantly impact our community, sharing their talents, time, and resources. They are very deserving of such honor, and I congratulate them all," Mayor Reyna said.

Sharon Sharp, a Rose Festival committee member, added, "This is a special trio of couples that were chosen because they are selfless leaders who don't look for credit."

Deloris Harrison said, "I am grateful for the City and Rose Festival committee. I've never served as Grand Marshal even though I've been asked before."

About the night, she thought it was a wonderful fellowship from Wasco.

"I feel humbled and blessed. I've seen so many people I haven't seen in so many years, like my former students. I was a teacher for 44 years," Harrison said.

Tilo Cortez said, "Being a lifelong resident of Wasco, I've gotten to see my mentors and people I hold in high esteem receive this recognition before me, and for the community to see us in the same light is a great honor."

Another Grand Marshal, Tim Holtermann, said, "I feel good because my family is here. It was a very nice turnout, and it showed there is still a lot of community support and involvement."

Many people attended the celebration, including Miss Wasco Rose Queen Ensley Mehlberg. It was her first official appearance, where she and her court were also recognized.

"I feel excited and can't wait for more events like this," said Mehlberg.

Mayor Reyna presented her with a ring that the Rose Queen Pageant had donated.

These young ladies and the Miss Wasco Rose Queen also received a key to the city from Mayor Reyna.

"She was a prolific painter, but more importantly, a teacher of art. Her paintings can be seen all over the city and state," said Drescher. "In the late 1990s, she donated many of her paintings to the City of Wasco when our City Hall was expanded and remodeled."

Drescher added, "Helen passed away in 1999, but she lives on through her artwork." 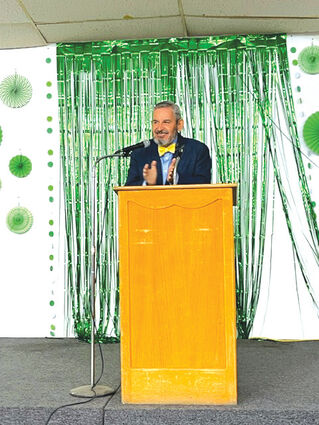 It was the first year the Elk Ladies hosted the Wine and Roses, and the first time they were acknowledged as honorary Grand Marshals.

The money raised from the event will go toward college scholarships for their members' children and grandchildren.

"I want to thank the ladies for taking this on, making it their own and putting on such a special event," Sharp said.

Sergio Garza, exalted ruler of the Elks Club, said, "They did a tremendous job and put a lot of time and effort getting this together."

Elk Ladies treasurer and event chair Liz Hutson Gerber said, "We were so honored to be even asked to do this and looking forward to doing it next year and many years to come."