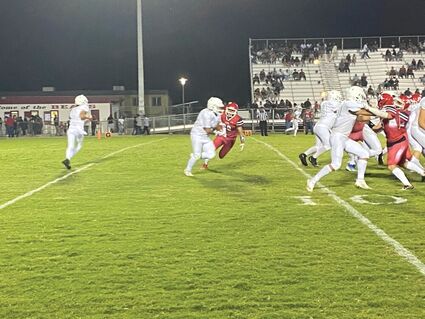 Christopher Espinoza runs for a first down.

The Shafter High Generals stayed undefeated on the season with a 20-19 victory over the Arvin Bears on Friday night.

This year's team is a very young one, and they showed some growing pains on Friday night, with several miscues on offense and a couple of lapses in the defense in the first half.

With having such a young team, the Shafter Generals showed a maturity beyond their years in the second half, with an inspired half of football that would keep the Generals perfect on the season. The surge began with a 28 yard field goal by Ernesto Guerrero that closed the gap to 6-3. On the ensuing possession, the Generals pinned the Bears deep in their own zone. Joel Gutierrez then sacked Arvin quarterback Omar Pardo in the endzone for a safety, making the score 6-5.

The Generals took their first lead of the game midway through the third quarter with a long drive that was aided by a couple of passes for first downs from Osborne. Osborne ended the drive with a 60 yard touchdown pass to Jesse Bernal. Mariyon Sloan then caught a pass for the two-point conversion, making the score 13-6. 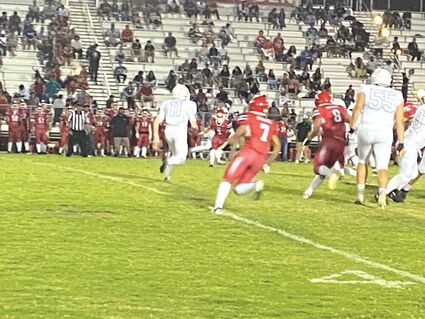 Rhodes gets a key first down for the Generals.

Shafter widened the lead with a 34-yard touchdown run, making the score 20-6.

Arvin didn't give up and answered back, exciting the home crowd, giving them a chance to win the game at the end of regulation.

Arvin scored in the last minute of the game, making it 20-19. The Bears attempted a two-point conversion. The Generals defense stiffened and denied the Bears the extra points and secured the win for Shafter.

Osborne ended the game with 15 completions on 25 attempted passes for 286 yards. Sloan had six catches in the game for 123 yards.

The Generals will be on the road for one more week as they take on Mira Monte High School on Friday night, before playing their home opener in their new stadium on Sept. 9 against Orosi High.