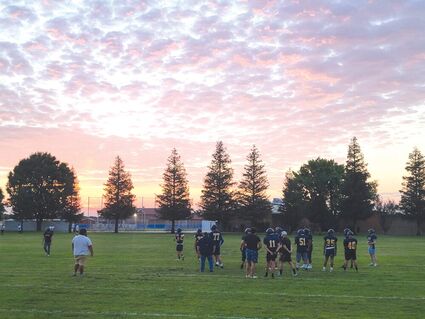 The Generals will be playing on their own field this year.

The Shafter High Generals football team will bereturning to their home field after spending a season on the road while their stadium was renovated.

With a brand new state of the art scoreboard, track, press box and concessions, the Generals will open their season with a nonleague game against the West High Vikings on Friday, Aug. 19.

According to Head Coach Jerald Pierucci, this year's squad should be a fun one to watch. On a roster of 27 players, the team will have 13 players who are sophomores and freshmen. "This year's team is really young, with a total of nine seniors, three of them with prior playing experience," Pierucci said.

In addition to the seniors, the Generals will have six juniors, four of whom were big contributors last year. The offensive side of the ball will be led by an offensive line including junior Parker Valderama, at 6-foot-2 and 265 pounds. He will be joined by junior Jeff VanderPoel, sophomore Ehtan Dunlap, Matt Cordova, and the lone senior on the line, Joel Gutierrez.

"This is a fun group to coach," said Pierucci.

In the backfield, there are two players leading the way from last year's squad, senior Koa Rhodes and sophomore Chris Espinoza. "Rhodes is our home-run hitter, who can take it to the house from anywhere on the field. Espinoza has great vision and can pound defenders in his downhill running style."

The wide receiver corps has two returners who learned a lot last year. Jesse Bernal and Jesus Figueroa are both weapons that will be used heavily. Rounding out the receiving corps is junior Jonathan Escobedo, Jesus Vasquez and freshman Mariyon Sloan. Pierucci said that this group will need to make some plays for their young quarterback.

The quarterback position will be filled by freshman Ezekiel Osborne. Ezekiel comes in with one of the best quarterback IQs they ever at Shafter High, according to Pierucci. "He is a freshman, so he will have some growing pains, but the team has really rallied around him and his abilities make it easy to do so."

AT linebacker, there will be three starters from last year. Koa Rhodes, Alex Aguirre and Jesus Figueroa. "The experience that these guys bring back allows us to use them in special ways and their speed makes them sideline to sideline players."

The secondary is all new faces with Jesse Bernal playing at the corner, and freshman Sloan and sophomore Vasquez rounding out the secondary.

Shafter should be playing their best ball come October and November.

Even with the large amount of youth on this year's team, Pierucci thinks that this year's squad is better than last year's and will be a lot of fun to watch.

"I believe that this year's team will be playing its best football when it counts, in late October and November," he predicted.