Wasco schools back in session 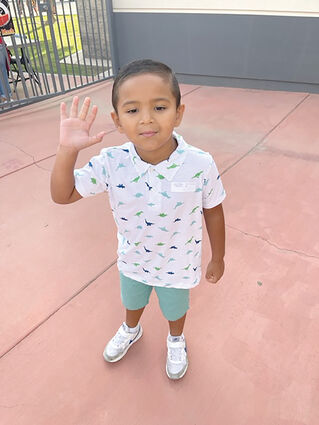 Kids were thrilled to start back up again.

John L. Prueitt Elementary School kicked off the new year with excitement. Six hundred four students made their way back for the first day of school.

The students dressed to impress and showed off their new school year clothes and backpacks.

Some students waited anxiously the whole summer, ready to embark on their new school year. Parents kept their children busy, preparing them by reading and engaging in other educational activities.

Other students said they were nervous about getting new teachers but anxious. They were glad that they were all together again.

Parents said they felt happy knowing their children would have an opportunity to play and make new friends while learning.

It was bittersweet for some parents saying that they were excited for their children but a bit sad to see them off. They kissed them goodbye, and some did the sign of the cross to bless them.

Staff and Principal Rosalinda Chairez checked in all students and walked them to their classrooms.

"It is a lot of hard work, but once it comes to fruition, it feels really good," said Chairez. "The best part about today was seeing the kids safe."

Smiles were common among the little ones.

She hopes for a fantastic year. "I look forward to another great year of academic success," she said, noting recent test results. "Our scores came in, and we did really well."

"We hope to be relentless in our school and district culture and really seeing how our staff, teachers and students will shine throughout the year," Luna said.

WUESD Superintendent Kelly Richers said, "Last year, we had an outstanding year academically, and I anticipate the same for this school year."