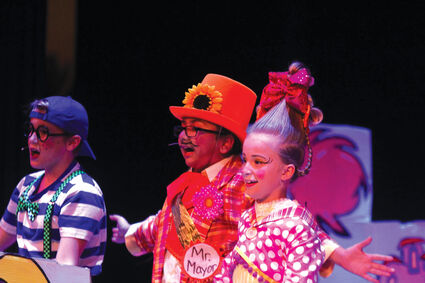 Micah Neufeld, Emma Gonzalez and Grace Givens played inhabitants of the tiniest planet in the universe.

The Shafter Children's Summer Theater had a perfect medicine for you if you were in need of a dose of entertainment this past weekend with their production of "Seussical" at the Shafter Ford Theater.

The play was put on with performances on Friday, Saturday and Sunday. Headed up by Cris Starrh, the theater group is in its 27th year, and has developed a reputation for great shows with performances that showcase the kids' singing, dancing and acting skills.

A new wrinkle in this year's production was the addition of the Rising Starrhs, who opened the show. This entertaining group is made up of kindergartners through second graders, who performed a show of songs related to the "Seussical" theme.

Starring Bailey Payne as the Cat in the Hat, the show depicts the struggles of Horton the Elephant as he tries to save the tiniest planet in the universe, set on the top of a speck of dust on a clover.

Horton was played by Carter Kohler, who sang and acted with a loyalty that gave the true meaning of friendship. He heard a cry for help from JoJo, a boy on the speck of dust that wants his people to be heard and recognized. The entire cast gave an entertaining performance, showcasing their acting range as well as a proficiency in singing and dancing.

One highlight was the hilarious Mayzie La Bird, played by Ezri Jaime, who was a perfect mix of sarcastic wit and playfulness. The costumes and set design were amazing as well, with the whimsical colors and bold shapes making up the world of Dr. Seuss. 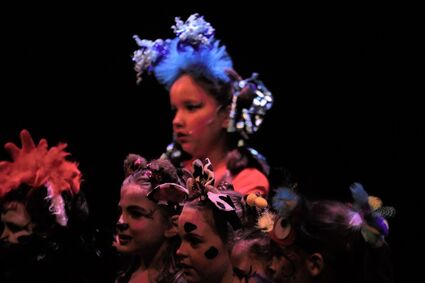 The members of the Rising Starrhs opened the show.

JoJo the Boy was played by Micah Neufeld, a veteran of the stage through previous productions in the Children's Summer Theater. Neufeld was on point with his vocal talent and his acting ability. Adorable and witty were the Mayor and his wife, played by Emma Gonzalez and Grace Givens.

Starrh and her team, including Directors Dana Starrh and Jayna Pierucci, got much out of the cast, whether or not those members had any prior acting or singing experience. The audience could see how much fun the entire cast was having on stage.

"It was such a great show. I think everyone did such an amazing job!" said Viola Brandt, who was there with her two daughters. "I am not a big fan of Dr. Seuss, but this was such a fun show to watch."

The band, including David Bloemhof IV, Chad Givens, Cris Starrh, Sam McKinney and Joshua Cooley, kept the show on tempo and added much to the performances.