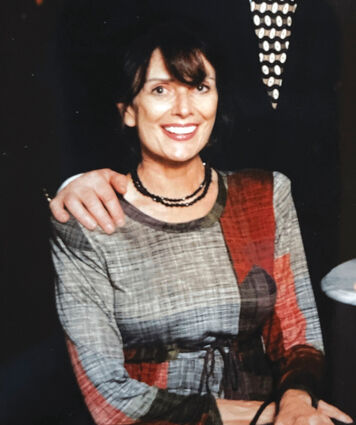 Funeral services will be held at 10 a.m. on Friday, July 29, at Peters Funeral Home Chapel in Wasco for Yvonne (Nonny), age 85, who passed away July 14, 2022, in Danville. Pastor Martin Blanton will officiate, and an interment ceremony will follow at Wasco Memorial Park.

Nonny is widely remembered as the beautiful high school girlfriend and then wife of Kelly Blanton. Her dark hair and eyes, high cheek bones and movie star smile contrasted against her red-headed, freckle-faced husband. She stood at his side through his long career as Kern County superintendent of schools, sharing every moment, discussing every turn. Partners for life, they were married 63 years, dating for six before they married so that Kelly could graduate college first. They were together constantly, through the final moments of her life. They always said they raised each other.

Nonny was creative. You could see it in her style, the jewel tones she wore – emerald, sapphire, ruby, gold and silver – and her fantastic large eyeglasses. Even the cars she drove, including her last, a purple convertible Mercedes. Like her father, Bates, Nonny cared about her ride. There is more than one story of her loaning a car to a young man who sought to impress a girl. Nonny knew what would work – her 1965 red Chevy Impala.

Nonny filled her home with her oil and acrylic paintings: dramatic scenes of dancers, a couple in an amorous clutch, ladies in glamorous hats, her pre-teen son Tim with his Linda Ronstadt poster, monkeys wearing eyeglasses, lawyers mid-debate.

Nonny had a keen instinctive intelligence. She could write with wicked precision. She saw what was absurd and recorded it, even if you didn't suspect she was doing that. Her intuition could drive you crazy, because so often it was right. So often she was right.

Nonny was witty. Such a pretty, feminine woman, she caught people off guard with her sharp punchline twists and her giggle when delivering them.

Nonny loved her children fiercely. She fought for every moment she could get with them. She was proud of their accomplishments, the lives they lived, the families they made. She took pure joy in her grandchildren, relishing the way her intelligence and creativity wove through them visually, musically, verbally, intellectually.

But Nonny was born into less sparkly, more gritty, times. Her parents, Jenny and Bates, traveled from Oklahoma to Wasco to escape the dust bowl, to remake themselves as farmers in the Great Depression.

In California, Nonny contracted polio as a toddler, living for almost a year in a hospital, in an iron lung, which is why she chose to die in her home, surrounded by family. No cords, no injections, no beeps or buzzes. She suffered the terrible nerve pain caused by polio until her dying day. She also suffered the pain of living in a time when doctors did not know how to treat her disease, a time when some people ostracized polio's victims. She worked hard not to be treated this way, sewing and wearing beautiful, twirling skirts that concealed the brace that made it possible to walk. Kelly understood all this and protected her against such hurt, cementing their relationship.

Though she was born into pain and struggle, Nonny responded by making herself unique, from start to finish. There is no other Nonny. Life will be less colorful and glittery without her.

Donations may be made to the Kern County Library, kerncountylibrary.org/support-the-library/