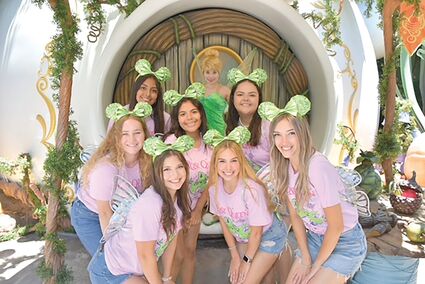 The girls dressed up in their matching outfits.

For the Miss Wasco Rose Queen pageant trip this year, contestants participated in a three-day visit to Disneyland Park and Disneyland's California Adventure.

On their first day, they enjoyed the hotel pool, swam and went on the waterslides. After, they attended a special dinner courtesy of a generous donation by Mike and Sunni Dobbs. The evening concluded with games where the girls got to know each other better. It was a night full of surprises and fun for them.

They spent the second day of the trip at Disneyland Park. The girls dressed in a matching Neverland theme, complete with fairy-wing backpacks and coordinated t-shirts, which elicited many compliments from park-goers. They were there until closing, taking in the sites and enjoying the rides.

Lunch followed, compliments of a sponsorship from Jeff and Stephanie Wymer. In the evening, they took in a spectacular fireworks show at the park with churros and cold drinks as a gift from Andre and Alicia Capinha.

The night was topped off with more rides on Splash Mountain, where they rode six times in a row. They said they had a "splashing" good time. It was a magical day for the girls.

Day three was spent at Disney's California Adventure, arriving right when the park opened. They loved all of the rides and activities. After that, they did a little shopping in downtown Disneyland and then a sleepy trip back to their hometown of Wasco.

The girls were overjoyed with the experience and appreciated the opportunity to connect through laughter and lots of fun.

Contestant Makenna Gebhardt, said that they were able to let out their inner child and take many photos they will cherish forever.

"My favorite part of the Rose Queen Pageant trip was bonding with the girls," said contestant Sabrina Miramontes.

Ensley Mehlberg said the best was being there with those that had never visited the park.

"Disneyland is already a magical place, but seeing it come to life for some of the girls there for the first time was even more magical to see," said Mehlberg.

The trip was special for them. Grace Derington said that going together on the rides as a group made it so much more memorable. "It made us all learn more about each other."

The other contestants are Nevaeh Snow, Noelia Valera and Daniela Ruiz.

The pageant will take place on Sept. 8 at the Wasco High School auditorium.

"This was a great way to kick off the pageant, and it is always a neat experience to see contestants do this every year," said Rose Queen Pageant Director Nicole Sanchez