SPD works to keep Shafter safe, on roads and in neighborhoods 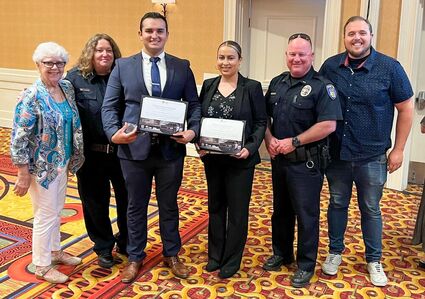 Officers Maria Puente and Edgar Davalos were honored by MADD for their outstanding performance in keeping the roads safe for residents.

The Shafter Police Department is to keep the community of Shafter safe, be it on the roads or in their neighborhoods, working in eliminating dangerous situations, be they big or small.

This is compared to 150 calls last year and one citation given out. "This year was a lot quieter here in Shafter compared to last year. I believe that a big reason is the proactive attitude of the department, with violators knowing that there will be consequences if they decide to break the law," Barnett said.

This sentiment was echoed by members of the community. "It was like night and day, comparing last year to this year," said resident Maria Torres. "Last year, it was like downtown Baghdad, I mean it was horrible. This year was a lot better."

In addition to the actions in the neighborhoods, the Shafter Police Department is also working to make the roads safer, with two of its officers being recognized by the MADD organization for their arrest performances of suspected drivers under the influence.

At a ceremony recently in Bakersfield, Officers Maria Puente and Edgar Davalos were given awards for each of them having 11 DUI arrests this past year. "We are proud of our officers and their dedication in keeping dangerous drivers off of the road," Barnett said .

Officer Puente has been with the Police Department for seven years.

Officer Davalos is in his third year with the department, coming from the Kern County Sheriff's Department, where he spent three years as a deputy.