Shafter Learning Center has a friend in Ariel Dyer 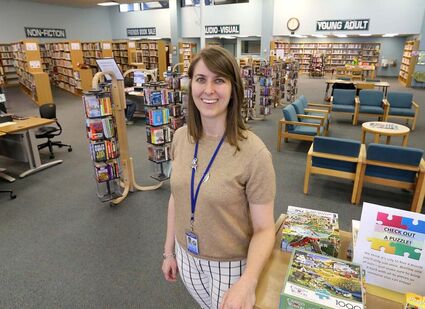 The Shafter Library has developed a great friend in Bakersfield College, with the school partnering with the city to operate the library, creating one of the only municipal libraries in the county.

The change to the library has been drastic, with a renovation to the building, an expansion that has added labs, a classroom and more, thanks to generous sponsors and a community of volunteers.

In addition to operating and staffing the library, the college has given the library and Learning Center another valuable asset in the form of Ariel Dyer. Dyer, a faculty librarian soon to be a reference librarian at BC, is the college's liaison to the Shafter Library .

Dyer worked as an event planner during the pandemic, coordinating community events for Bitwise Industries. She left the company and became a program manager for Bakersfield College, and was then offered the chance to work with the college-library partnership.

Dyer met with Learning Center Director David Franz, Amerika Nino-Rodriguez and Katie Wiebe to plan for the revitalization of the library. Fortunately, the team was already in alignment when it came to those plans,

"It was clear right off the bat that we were interested in the same things," said Dyer. "We wanted to make the library modern and accessible for people. We had a lot of cool ideas, and everyone was on the same page."

Dyer then worked with the Shafter Friends of the Library, helping weed out over 1,500 books from the children's collection, a lot of which were old and obscure. The Friends also helped in curating other sections of the library and took the time to clean all of the books with wipes.

Dyer was impressed with the attitude and spirit of servitude shown. 'There were people here for hours every day. They were an immense help." She was also a big part of the addition of more young adult novels to the collection, seeing the growing interest in the genre. Dyer herself loves to read horror fiction, and she reads a lot of graphic novels.

Dyer believes that the Shafter Library is special because of the community, the people who use the library. She said that it has residents that are not afraid to speak their mind, and has a City Council that listens.