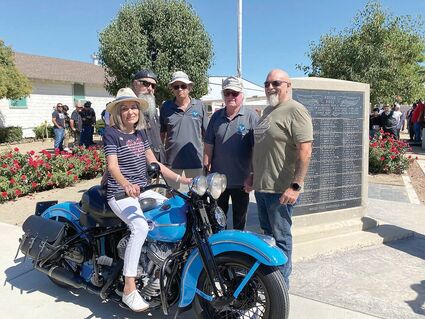 A ceremony was held on Monday, July 4, which is Vincent Anslinger's birthday. Anslinger was stationed at Minter Field beginning in December 1941, as part of the Army Reserves.

Anslinger's daughter Arlene contacted the Minter Field Air Museum recently wanting to donate her dad's Harley to the museum. She had the bike restored and thought that it was right to bring it back to Minter Field.

Anslinger was born in Indiana, and had enlisted in the Army in 1927, serving his country in the Field Artillery Division until 1940, when he transitioned into the reserve.

He met his future wife, Hazel Shanks, during this time. Anslinger had been stationed at Minter Field and lived in Bakersfield. He was seen daily riding his Harley Davidson to and from the military base,

The war ended right before Anslinger was to be shipped out to Europe. Anslinger then returned to Bakersfield, where he would live the rest of his life.

Arlene decided to donate the bike to the museum after some soul searching, and she acknowledged that it was one of the hardest things she has ever done, but she knows that it was the right thing to do, for herself, the museum and her father. Arlene contacted Ronald Pierce, the director of the museum, where she told him about the bike.

A ceremony was planned for July 4, 2022, which would have been Vincent's 104th birthday. Anslinger had passed away in December 2012.

There was a pleasant surprise twist to the story when the museum had posted announcements of the scheduled ceremony. The museum received an email from a gentleman from Bakersfield that informed them that he had Anslnger's old airplane. 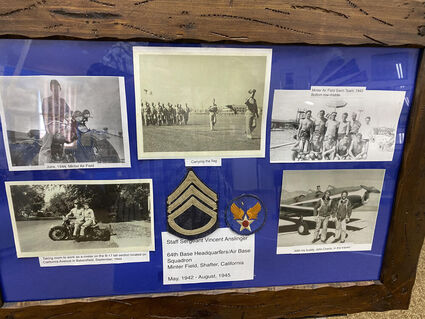 Arlene Anslinger also donated this display of awards and pictures of her father.

When questioned, Arlene said that her dad had become a pilot and had loved flying his beloved plane well into his 80s. Actually, the plane was sitting at the Minter Field Airport, torn apart having maintenance on it by the current owner. He offered to put the plane back together in time for the ceremony. Arlene said that she would love to see the plane and mentioned that she remembers riding in it a couple of times when she was a small child.

The red and white plane was there at Minter Field on Monday morning, as a convoy of motorcycles that had begun at the Harley Davidson store on Seventh Standard Road arrived with the 1941 Harley that was making its way home.

Mark Welch, of the Harley Davidson shop, said that this was a special day. Ben Patton, another friend who was instrumental in the planning and execution of the event, said, "This is truly a piece of history, and we are so proud to be a part of it."

The motorcycle can be viewed at the museum, along with a few other artifacts connected to Anslinger.