A day of celebration in Wasco 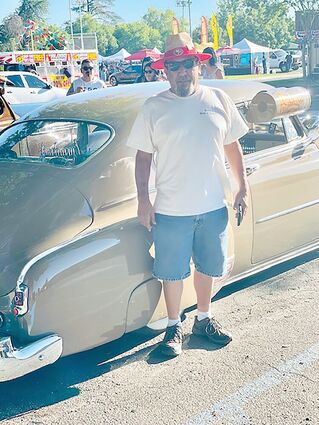 Berny Lopez brought his 1951 Chevy Fleetline to participate in the car show.

The Wasco Recreation and Parks District hosted their One Nation Celebratio, incorporating many new elements.

A special component this year was a bicycle parade around Barker Park in partnership with Toys for Tigers. Riders decorated their bikes and trikes with a 4th of July theme.

"It is wonderful to see all of these kids and adults participating in the first independence celebration bike ride. I had a lot of fun," said Mayor Gilberto Reyna. "I hope this is the beginning of a new tradition in our city."

Nine-year-old McKenna Castillo said, "I loved decorating my bike and riding with my friends."

"I am impressed with everything. I think it will be even bigger next year," said Pat Ketcherside of Toys for Tigers.

This year, there was a car show in honor of the longtime community advocate Danny Rueda.

"I feel extremely blessed that they tributed the car show to my dad. I know he would be ecstatic if he were here," said Victoria Rueda

"I was emotional and happy they still remember my husband after a year of his passing," said Petra Rueda.

DJ "S" kept the energy vibrant all day with his selection of upbeat English and Spanish songs.

There was a wide selection of food, such asloaded nachos, tacos, churros, funnel cakes, corn in a bowl, fish & chips, hot Cheetos with cheese, shaved ice, fruit cups and agua frescas in lemonade.

"We came to try the different foods," said Camila Palacios

"I had the potato on a stick with toppings. We tried almost everything," said Mary Skeels.

There was a Red White & Pool Party.

"It was especially fun for my kids," said Carmen Vallecillo. "They enjoyed jumping in and out of the pool."

A watermelon eating contest was added to the festivities. Winners received prizes like passes to the pool, candy and a goody bag with 4th of July items.

Whole families came together for the event.

"It was great for the community and families to get together and celebrate this holiday," said Edgar Plasscencia. "The best part was all of the activities for the children."

Katie Moreno, the club advisor for the Traveling Tigers, attended with her students to raise money and awareness for their Spain trip and sold 4th of July patriotic favors.

"We want people to know our club," said Moreno.

There was a selection of vendors.

Silvano Santos was there selling traditional Mexican clothing and shoes. "It was a nice way to showcase our culture," he said.

"This our fourth year at the festival, and our sales are always very good," said Ramirez.

It was a team effort to put on the event. 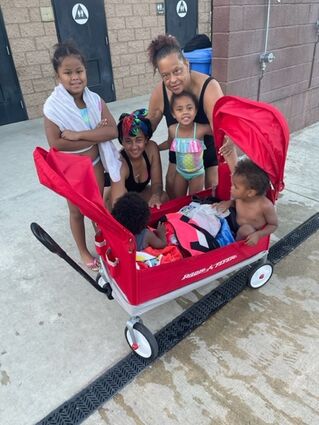 Gayle Coleman, with her family, thanked the city of Wasco.

"Our small staff were all involved in the planning and prepping. Of course, we would not have had a fireworks show without sponsor contributions," said District Manager Chris Serna of WRPD.

The event ended with a spectacular fireworks show.

"This was my first year ever seeing it. I thought it was beautiful and very much enjoyed it," said Kara Haney. "The best part was the finale. It was gorgeous with all of the different colors."

"I thought it was really cool and a great way to end the event," said Obdulia Garcia.

"It was fun to see the community come together of all ages to enjoy the event and to be able to watch the glamorous patterns formed by the exploding fireworks," said Serna. "It was breathtaking. I am happy the community was able to enjoy that."