Trojans get promoted to Generals 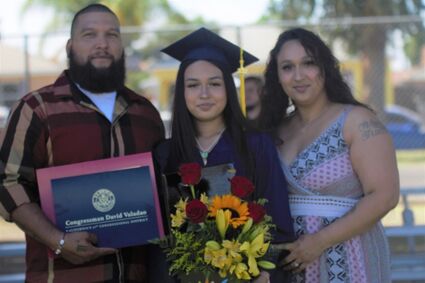 The Richland Junior High Trojans spent their last day as 8th graders walking across the stage to celebrate the completion of their junior high careers, promoted to high school freshmen in the fall.

Principal Monica Garza welcomed the graduates and their families to the festivities and told the students that even though they hadn't had a picture-perfect junior high experience, "it is one that you will never forget and that will shape you into who you are and are going to be."

Garza mentioned that they were the second class to graduate through the pandemic and that they should be proud of their achievements despite the obstacles and trials that they have had to face. "You guys were forced to grow up in a hurry, but you did so with class and grace."

Continuing a longtime tradition, Richland Junior High selects a Tommy and Tammy Trojan, who exemplify the spirit of being a Trojan. They are emcees of the ceremonies and also receive an engraved pen as a keepsake. The honorees this year were Juan Cervantes and Cynthia Chavez. There were also two students, Adeline Aguilar and Emely Faith Chavez, inducted into the Richland Junior High Honor Society, having achieved high GPAs for two years.

Adeline was the valedictorian and Emely the salutatorian of the class.

In her speech to the graduating class, Adeline spoke of the trials that they had gone through, including the spring break that turned into months out of school. "Then it was going to school through a computer screen, only able to see our friends in pictures."

Adeline also said that all of her classmates are stronger for having gone through the pandemic. "The strength we gained from this will show us how to overcome the challenges that are yet to come." 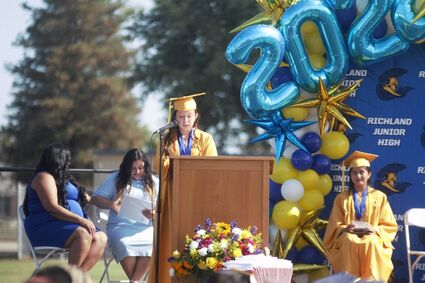 Emely said that now they will be starting to focus on their futures, on who they want to become and how they are going to get there. "Sometimes we might feel overwhelmed by what career to choose. We may feel tormented by how others see us. But, we only live once, so ultimately we have to live for ourselves."

Principal Garza then presented the class of 2022 to Shafter High Principal Russell Shipley, who congratulated the students and said that he was so excited to have them as his freshmen class in the fall. "One thing I want you to remember is to not be afraid to try something. It doesn't matter what it is, a club, sports, drama, agriculture. Whatever your interest, Shafter High has something to fill it. Don't look back after these next four years fly by and have any regrets."

After the presentation of their awards, the faculty formed a line down the center aisle to greet the students on their way out of the field.