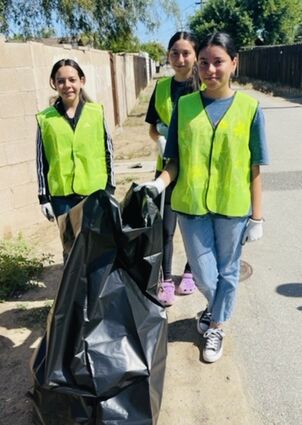 In partnership with American Refuse and Alianza, the City of Wasco's Code Compliance Department hosted a community cleanup event last month. Many volunteers participated and showed their support for an initiative to beautify Wasco.

There were almost 60 people that attended on May 14. The volunteers were broken up into smaller groups to focus on gathering trash from the alleys and parks.

"This is a problem in Wasco. With our community cleanup, we are doing our best to address this issue so garbage doesn't end up in streets, alleys or farmland," said Wasco Code Enforcement Officer Sergio Gonzalez Jr.

American Refuse provided large truck bins for the community to drop off their bulky waste at no cost.

"We have partnered with the city since 2004 to deliver a service to citizens to eliminate illegal dumping and keep Wasco clean," said American Refuse owner Jeff Martin.

"This helps keep these items out of landfills and is better for the environment," said Roy Maxberry of Alianza.

Some residents made multiple trips.

Guadalupe Delgado dropped off exercise equipment, a bike, a table and bedroom furniture.

"These items were sitting in my garage for a very long time. I was excited to hear about this so I can finally declutter," Delgado said.

"I cleared out my backyard and shed with stuff that took up space for the last six years. It made it easier to come and drop off, and better than sticking it in an alley," said Jamie Hoisington.

"The dump is expensive and a half an hour away. With gas prices so high, this really helps," said Samuel Rodriguez.

It was convenient for everyone, especially those who didn't have a way to transport their bulky waste. If requested, a truck was sent to their home to retrieve the garbage.

"Trash is always unsightly, and we need to be conscious that we want to keep our city liveable and nice," said Councilmember Mike Lynch. "People don't know [that] if you call American Refuse or the city; they will come and pick up your bulky items for free."

"I want to thank the local high school youth that came out for us," said Gonzalez.

"They could be doing something else, but they are here cleaning up Wasco. I am grateful and happy they volunteered. The youth are the future of our city, and this demonstrates to them they can make a difference," said Mayor Gilberto Reyna.

Volunteers seemed to enjoy themselves.

"Today was special because I got to be a part of a team doing something positive. The weather was nice, and I liked being outside making new friends who also care about teaching others [that] littering is bad for our city," said Jaretzi Zuno.

Community members can host their own neighborhood cleanup effort, and American Refuse will donate garbage bags, rollers and paint to cover graffiti. 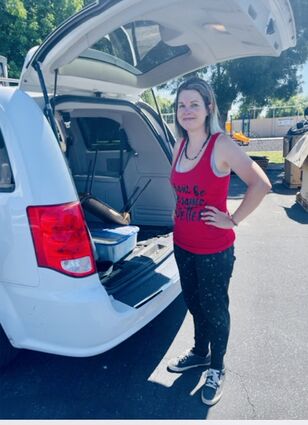 Jamie Hoisington cleaned out her shed and brought her bulky waste.

The event ended with a barbeque as a treat for the volunteers and sponsors.

"We couldn't have done it without their help. Our volunteers showed pride in their city, Alianza took care of the e-waste, and American Refuse supplied all the equipment, trucks, bins and employees," said Gonzalez.

Another cleanup is planned for the fall.