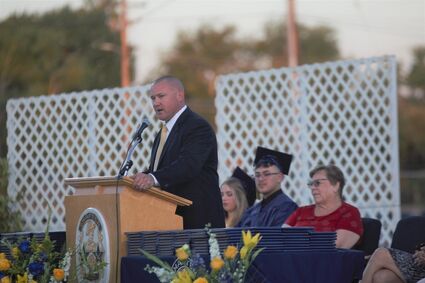 Shafter High School's Class of 2022 walked across the stage at the newly renovated Shafter High Stadium on Wednesday night, saying goodbye to the rigors of being a high school senior and stepping into their new roles, be it a college student, a soldier or a part of the workforce.

Principal Russell Shipley welcomed the graduates and their friends and families to the ceremony, giving credit to the dedicated staff at Shafter High for being able to hold the ceremony at the unfinished stadium. "It's not quite done yet, but we weren't going to graduate on a practice field, or someone else's stadium. We are graduating in our own stadium," Shipley said, resulting in a large cheer from the crowd.

One of the speakers for the evening was Nicole Morris. Morris is the Distinguished Young Woman for the Shafter for 2021.

Morris spoke bravely of the battles she had her freshman year with some mental health issues and trying to find herself. Morris thanked her teachers at Shafter High, especially Hal Friedman, the Drama Club advisor, for showing her how to open up, which gave her a purpose and a dream that she plans on pursuing.

Another highlight of the evening was the announcement of the top four students with the highest GPAs for their high school careers. The Doc Stringham Award – named for the patriarch of the Stringham-Weidmann pharmacist family – had two sets of ties. Kyle Cleveland had the fourth highest GPA of the 2022 Class. Taking third place was Jeremy Seinz, with a 4.389 GPA. There was a tie for second place in the class between Arlette Richards and Miriam Soto Cabrera, with identical 4.397 GPAs.

Tied for first in the class were Edith Guadalupe Beltran and Yamir Dimas. Dimas was honored earlier this year with the Young Person Award from the Shafter Chamber of Commerce. 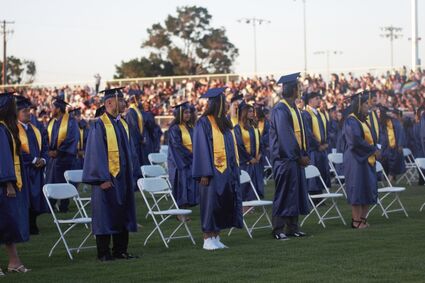 Almost 90 of the graduates wore the gold stole of the California Scholastic Federation.

Kern High School District Board of Trustees member Cynthia Brakeman told those gathered how proud she was of this class for their perseverance, dedication and strength in each other. "This might not have been the exact high school career that you pictured four years ago, but you will never have anyone take this experience away from you. You are unique, special, and are an example of your wonderful teachers and staff here at Shafter High."

It was also announced that, in addition to having one of the largest graduating classes in Shafter history, the school also set a record for the most members of the California Scholarship Federation by any one class. Nearly 90 students earned a gold cord with their cap and gown, symbolizing the achievement.

After the diplomas were handed out, it was time for the students to congratulate one another, and have one last night as Shafter High seniors.