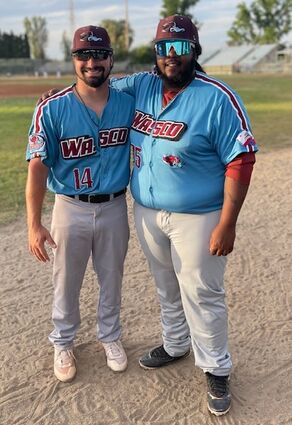 Assistant Manager/Pitcher Ryan Osborne, with Manager Christian Carmouche, said he is more than just a teammate; he is family.

The Wasco Reserve professional baseball team recruits players from throughout the United States and abroad. One particular player that stands out is Ryan Osborne. He brings the team a passion and love for the sport that he has developed over the many years he has played baseball.

Osborne is both a player and assistant manager. He comes from Long Island, New York, and is back again for his second season.

He has played from a very early age and was influenced by his father, who also played professional baseball.

It is a family affair with his brother Ben Osborne, a recent college graduate, playing on the team.

When he is not playing with the Reserve, he works as head baseball coach at John Jay College, a Division 3 school in Manhattan.

"I like it because it gives me the opportunity to develop and grow young athletes," said Osborne.

This season he will once again be a pitcher for the team. Osborne helped give Wasco its first win in the season, playing against Bakersfield with a complete game pitching all nine innings where they won 8-2.

He was going to retire from the Reserve but was convinced by Manager Christian Carmouche to stay. He loves the city of Wasco and the connection he has to the fans, which was also another factor in his decision to return.

Osborne is excited for the season, especially to work hand in hand with Carmouche. He said they have a special bond and considers him a brother.

"Together, we hope to accomplish making playoffs and playing our hardest to win the division," said Osborne.

As an assistant manager, he is looking forward to helping the players further their professional baseball careers.

"I love communication and working with the guys on mechanics, positive mentality and stamina," said Osborne

Of creating a positive mentality, he said, "I encourage the players to think positively about themselves around their craft and how they play the game."

"I am not a guy to bring someone down; I would rather lift them up."

Carmouche believes Osborne is a great team player, always willing to learn and grow even though he has a lot of experience.

"Osborne is always willing to help someone in need on the team and in life, and wants to see everyone succeed as much as he wants it for himself. He is the epitome of what a player should be," said Carmouche.

"He is the life of the party, has a sense of humor and is a people person, which makes him a great coach. He is one of those guys you can talk to about anything." 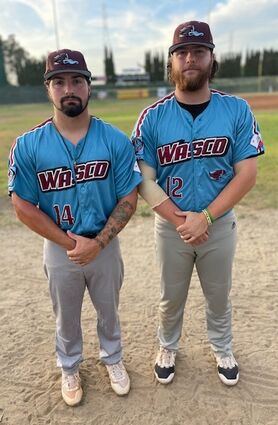 Assistant Manager/Pitcher Ryan Osborne and his brother, Ben Osborne, both grew up in the sport.

Carmouche and Osborne are aligned in their mission to grow together as a coaching staff to build a program where they can continue to win games and take their players to the next level.

"The idea is to build more memories that will last for a lifetime because it is more than just a game," said Carmouche.

Osborne wants the community behind the team and invites the public to attend their home games in Bakersfield at Sam Lynn Ballpark.

For a complete season schedule and roster of players, visit wasco.reserve.com.