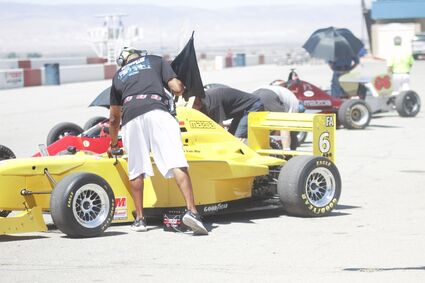 The cars get prepared before entering the race track.

Buttonwillow Raceway was the site of the Cal Club's Regionals this past weekend, with over 300 racers on the track competing for in the Regional Championships.

There were six different classes in events, with drivers vying for places in the rankings in the season series that will culminate in the National Championships held in Virginia this year. The Nationals rotate sites, with the event last year held in Las Vegas.

Cal Club is the organization that had the Buttonwillow track built. The track hosts all sorts of teams that utilize the facility for testing.

The event this past weekend saw drivers from all classes competing on the track, with trophies and series points up for grabs.

According Ceci Smith, the event coordinator and office manager for the Cal Club, the event is for all competitors in the Western Region, with points going toward their goal of qualifying for the Nationals.

The event was open to all SCCA classes and all SCCA competition license holders, as well as all those licenses accepted by the SCCA. There were different levels of competition, from novice up to full competition.

The event had a local flavor. In addition to a few drivers from Bakersfield, the field boasted a local man from Shafter in the competition. Mark Ballengee was entered in the Spec Class races, going up against racers from all over Southern California. 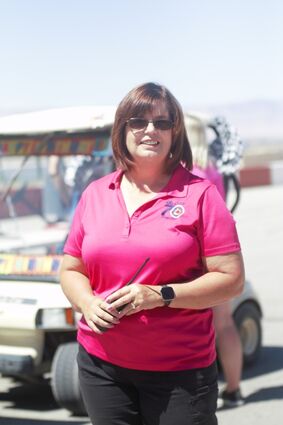 Event Coordinator Ceci Smith said that the event was scheduled for an early morning start to combat the heat.

Ballengee placed third in his division on Saturday, with a third place finish on Sunday. Ballengee has been racing for over 20 years, with some good finishes to show for his efforts. Ballengee owns around 20 cars, with a lot of younger drivers in the driver's seats. He said that he will be leaving for races in Wisconsin later this week, with stops in Laguna and Monterey in the near future.

"I love racing, and love helping the younger guys learn how to drive and move them up the ranks." Ballengee, who is 72 years old, holds his own with the younger drivers, as well as helping them with their careers, giving them a ride to compete in. He said that he has had a couple of drivers he mentored go into the Indy Car circuit.

The next event in Buttonwillow will be a National Time Trials event, drawing drivers from all over the country.