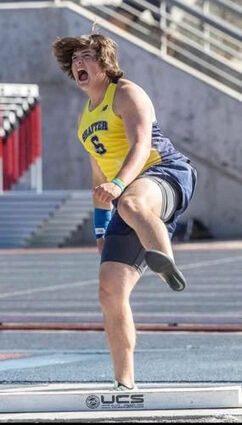 Godbehere won a seventh-place medal with this throw of over 189 feet.

Nick Godbehere of the Shafter High track and field team threw his way to a seventh place finish in the discus throw at the CIF State Track and Field Meet held at Clovis Buchannon High School on Saturday.

Godbehere also captured 11th place in the shot put competition. Godbehere, who came into the meet ranked in the top 10 throwers in the state, led the field of 12 qualifiers after the first round in the finals with a throw of 189-feet-2. He had qualified on Friday in fourth place in both disciplines, but could not match the performances in the final rounds.

After leading after one round, the wind picked up and Godbehere couldn't get a legal throw in his next three attempts, fouling on each throw. Godbehere was happy with his first throw, but said that he couldn't get the wind to carry his throws.

"I think the first throw was a good one, and I was excited about it, knowing I could build on it, but later in the finals, the wind picked up and my throws just weren't getting picked up by the wind like the other guys' were."

He said that his technique was a little off, either over-rotating because he was trying to generate a bunch of speed and power, or he couldn't get the load off of his left and drive it. "So it was just real close technical errors."

Godbehere, who has committed to throw for the University of California at Berkeley next year, said,"Even though the outcome wasn't what I was hoping for, being seventh in the state is still pretty cool."

Godbehere later placed 11th in the shot put, his best mark being 51-feet-9, well short of his personal record in the event, which was over 61 feet.

He was planning on competing in the NSAF Nationals in Eugene, Oregon, in three weeks, but his plans haven't been finalized yet. Godbehere joins a large group of throwers from Shafter who have graced the State Meet stage.

On Friday, in qualifying, senior Devon Sundgren ran a 10.64 in the 100 meter dash, placing him at 13th, just missing the finals round.