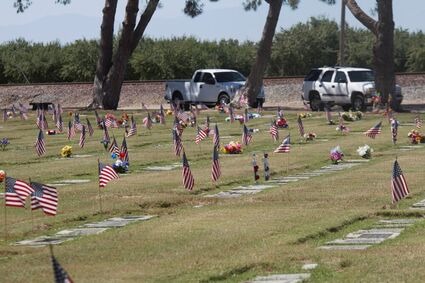 An American flag was placed on all of the veterans' graves at the Shafter Cemetery..

After a two-year hiatus due to the covid-19 pandemic, the Shafter Cemetery held its annual Memorial Day service, honoring those local heroes who served in our Armed Forces and have passed away.

The service was begun by Brian Smith, a Marine veteran, welcoming the crowd to the ceremony, followed by the invocation and the Pledge of Allegiance. Musician Gene Absher was on hand to play a couple of songs, one of which he wrote himself, after hearing stories of his father fighting at Iwo Jima.

The grounds were majestic, with small American flags stationed at all of the veterans' graves, with large flags lining the pathways, waving in the breeze. Smith told the story of how Memorial Day came to be.

Smith said that the first Memorial Day took place back in 1868, when Commander in Chief John A. Logan of the Grand Army of the Republic wanted to honor the Union soldiers who had died in the Civil War. The World Wars turned it into a day of remembrance for all members of the U.S. Military who died.

There were also poppies being handed out at the service. In 1918, inspired by a poem, YWCA worker Moina Michael attended a YWCA Overseas Conference wearing a silk poppy pinned to her coat. The poem was written by a physician, John McCrae, who wrote "Flander's Fields." Its opening lines refer to the fields of poppies that grew among the soldiers' graves in Flanders. In 1920, the American Legion adopted the poppy as its official symbol of remembrance. 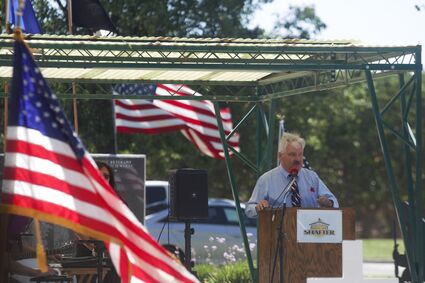 Rev. Randy Miller of the First Southern Baptist Church spoke of those heroes who made the ultimate sacrifice.

The veterans who are buried in the Shafter Memorial Cemetery were honored by family, friends, and community members thankful for their ultimate sacrifice. These brave men and women are listed in a special section of the Shafter Press newspaper, each name representing a hero that sacrificed for our freedoms.

This was the main message that Rev. Randy Miller, from the First Southern Baptist Church, gave for the good crowd that attended the ceremony. Miller said, "One thing that I remember most of all at the many veterans' services that I have been a part of is when the American flag is folded at the end of the ceremony. It is folded in such a way that it cannot come undone. It is then given to the family of the fallen soldier. This symbol of our freedom and their sacrifice that can never be undone." He said that the soldier then, while handing the flag to the family, "On behalf of the President of the United States, we thank you for your brave and selfless service."