Local man comes back to his roots 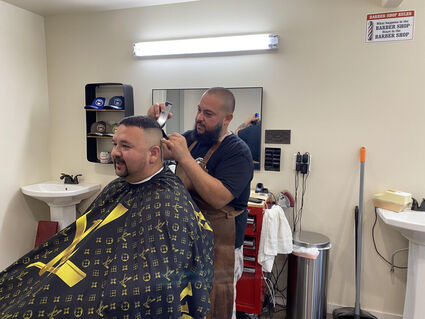 Edgar Gonzales cuts a variety of styles at the shop.

A local man who graduated from Shafter High School has returned to town and is operating the newest barber shop here. Phatboyz Barber Shop.

Edgar Gonzalez has been operating his own barber shop since 2006, with a shop of the same name in Wasco building Gonzalez's clientele. Gonzalez's clients followed him to Shafter after the move, along with with a new group of customers.

Gonzalez said that he started cutting hair when he was 13 years old. "Every summer, we would shave our heads, so I got nominated to do the honors. A Kmart pair of clippers, and I was good to go," he said.

Gonzalez is known for his willingness to give a customer any type of cut that they want. "A lot of kids will bring in a picture and say, 'I want that,' " which Gonzalez does. "If I can see it, I can do it."

Gonzalez graduated from SHS in 2002 and went to work for a roofing company. He was injured on the job and was on disability for a time. With that time and some assistance, Gonzales decided to make his childhood talent a career and went to barber college. He said that he had decided to attend the school while he was still working – it just would have taken longer, with going to class and working around a job.

After getting his license, he went to work for Tony's Barber Shop in Bakersfield, but found that he was actually cutting more hair at home on his own time. 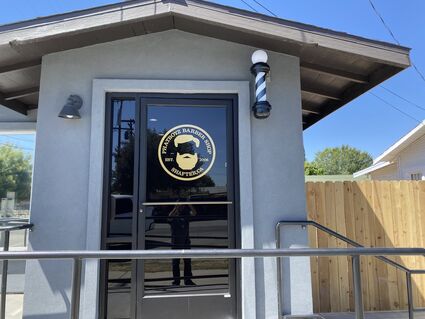 Gonzalez opened Phatboyz in Wasco in 2006, with a steady flow of customers. The list grew as word spread, with customers making appointments or trying their luck as a walk-in.

Today, Gonzalez said that he does do walk-ins if he is not booked, but is usually booked two to three weeks in advance.

"I decided to come back to my roots here in Shafter," said Gonzalez, who, together with his wife, are raising their four daughters. The shop is cool, clean and modern, but the service is all old school. "I am a traditional barber, the cut, the shave, good service."