SHS seniors honored in a night of awards 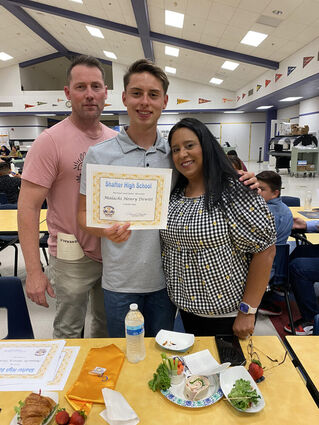 Malachi Dewitt was the recipient of numerous awards, including the Michael and Janet Schroeder Shafter Press Scholarship. Dewitt is with his parents, Melissa and Allen Dewitt.

Shafter High seniors were in the spotlight on Tuesday night as over 100 students were honored with awards and scholarships at the annual Senior Night awards event.

With a large crowd gathered at the Fred Starrh Performing Arts Center on the campus of Shafter High, seniors from Shafter High were rewarded for their hard work and efforts during their high school careers.

There were scholarships given out totaling over $250,000 to outgoing seniors, enabling them to start their college careers with a head start. There were also numerous certificates, medals and cords presented, recognizing the students for their cumulative efforts in a required number of semesters.

Included in these awards was a record-breaking one for Shafter High. Principal Russell Shipley announced that never in Shafter High history has there been almost 90 students qualify for being members of CSF, the California Scholastic Federation. "I am so proud of this class, for its hard work, its perseverance in difficult circumstances, and its excellence that is the rich tradition of being a General," Shipley said.

There were a record number of California Scholarship Federation members at Shafter High this year.

Dewitt said that he was honored by the awards and will put the assistance to good use. Dewitt will be continuing his education at Cal Poly San Luis Obispo and will be majoring in ag business. He is planning to returning to Shafter and running a farming company. According to Dewitt's father, Allen, "He is also looking at using the company to helping people with disabilities get an opportunity to have a job and contribute as members of the workforce."

According to Shipley, the graduating class of 2022 is 356 students. On Tuesday night, 121 of those 356 received an award or scholarship.

Another multiple award winner on Tuesday night was Natalie Olvera. Olvera received several awards from the Distinguished Young Woman of Shafter, being the First Alternate, in addition to being the scholastic, self expression and spirit awards. She also received awards for her hard work and excellence in the Project Lead the Way program. She was chosen as the Outstanding PLTW Biomedical Award winner, among several other awards.