Desiree Arreola, who played Director Feldzieg, and Ivan Figueroa, who was Adolpho.

The Shafter High Drama Department put on their production of the Broadway hit, "The Drowsy Chaperone," on Thursday, Friday and Saturday nights at the Fred Starrh Performing Arts Center on the campus of Shafter High.

Directed by advisor Hal Friedman, the ensemble presented the parody of 1920s American musicals to crowds of over 100 each night.

The play tells the story of a couple getting ready to get married, accompanied by his best man, the maid of honor, who is the title character of the production, and a host of odd characters.

David Bloemhof IV played the groom, Robert Martin, and the bride-to-be was portrayed by Emily McGuire. Both actors are veterans of the stage, performing in previous productions at Shafter High, as well as the Shafter Childrens Theater and Young Adult Theater. Bloemhof had a meaty role in the Young Adults Theater's production of "Newsies." McGuire played Janet Vandergraff, a rising star who is willing to cut short her career to become a bride.

Another veteran of the local theater scene, Laura Neufeld, played the Drowsy Chaperone. Neufeld entertained the crowd with her singing chops and her hilarious portrayal of the title character. "The Chaperone was so funny!" said Misty Umpress, who was there with her parents. "Everybody was great, and the play was a lot of fun."

In the B plot of the production, the director of the Follies, starring McGuire, was being forced to prevent the wedding from taking place, preserving the future of the Follies.

The director is getting pressure from a couple of bumbling gangsters, disguised as pastry chefs, threatening to treat the director to an unpleasant recipe for pain. 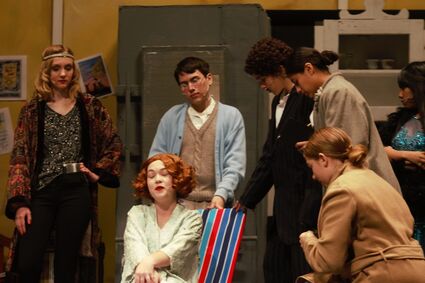 Narrated by Matthew Penner, who portrays a musical fan, the play has everything in it – heroes, heroines, villains and even a latin lover who tries to woo the bride-to-be, only to set his sights on the maid of honor by mistake.

Friedman said that the production was a fun one to direct, letting the students express their acting chops and learn to dance and sing, for those who may not have had much experience before the production began.

For a group of students who for the most part had little acting and singing experience, the production was a hit, garnering applause and praise throughout its run.

"I think that the play was fantastic. Everyone was so funny. I didn't know that Shafter had so many talented kids in it. It is just amazing watching a play like this from kids, who aren't show biz veterans," said Raul Perez, who was enjoying the play with his sister and niece. "I can't wait until their next play."