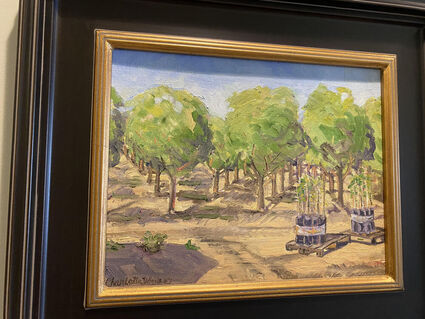 This piece was displayed at Tin Cup.

Charlotte White, who has been painting for over 50 years, is preparing a new exhibit for Shafter's Tin Cup, with paintings of local life, including a painting of the Green Hotel, Shafter's historic landmark.

White has had a display of three paintings at Tin Cup with a picture of local almond groves, as well as a landscape. White said that it was time to switch out the pieces, giving people the chance to see a different collection.

White began painting over 50 years ago, realizing that she had a knack for capturing scenery, and people at work, giving the pieces life with strokes of the brush. White began teaching locally, and has continued to teach to this day at the Bakersfield Art Institute, in downtown Bakersfield, and will have a large exhibit at its gallery in October.

White is naming the collection "History of Bakersfield" and will include people at work, as well as several city landmarks captured in a variety of mediums. White uses oils, watercolors, acrylic, and she also sketches. 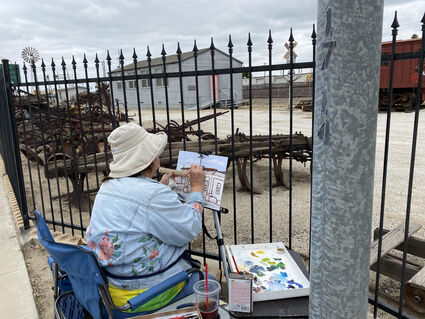 Charlotte White paints in front of the Shafter Depot Museum.

Recently, White was sitting in front of the Shafter Depot Museum, painting the front of the building, using her paintbrushes, as well as her trusty compass that she uses for straighter lines. "I am painting here at the museum today, and tomorrow I am going to keep working on a piece that will be included in the October show. I am painting the historic Luigi's restaurant. I set up my cones around me and get to work," White said.

She has works displayed all around Shafter, including at City Hall and inside several businesses. You can tell her work by their local flavor, capturing scenes of Shafter throughout the years. She also had several of her works depicted in a blanket that was created for Shafter's Centennial Celebration a few years ago, now on display at City Hall.

White said that a local school she had been teaching at outsourced her position, so she is going to use that free time to put more time into her painting, as well as maybe do some traveling.