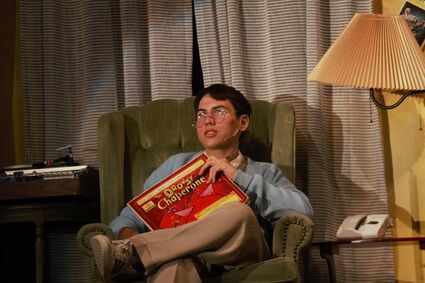 Matthew Penner plays the narrator of the production.

The Shafter High Drama Department, with the accompaniment of the SHS Band, performs the Broadway hit "The Drowsy Chaperone" this weekend.

The parody of American musical comedy of the 1920s concerns a middle-aged asocial musical theater fan, played by Matthew Penner. As he plays the record of his favorite musical, the show comes to life onstage, as he wryly comments on the music, story and actors.Shafter drama teacher and Bakersfield Ovation Theater artistic director Hal Friedman will direct the play.

David Bloemhof IV plays the groom and his bride-to-be is portrayed by Emily McGuire. The production will be presented at the Fred Starrh Performing Arts Center at Shafter High School on Thursday, Friday and Saturday nights, beginning at 6 p.m.

Bloemhof is a familiar face to Shafter theater-goers, with his roles in several productions put on by the Drama Club, the Shafter Childrens Theater and the Shafter Young Adult Theater. Recently, he was in the smash-hit "Newsies" that played at the Ford Theater.

Bloemhof said that he began acting at about 7 years old. "It started out with my mom encouraging me to participate, exposing me to the arts. It ended up being a love affair with music and the theater that I have today."

Bloemhof also plays the piano, bass and a couple of other instruments, in addition to his acting. He had to learn to dance for the Newsies production in a role that required the skill.

Another veteran of the boards is Laura Neufeld, who plays the title character in the production. Neufeld also has been in several local productions at the Ford Theater.

Some of the other cast members are Adan Vargas as the Underling, a pair of gangsters posing as pastry chefs played by Jonathan Valenzuela and Andrew Magana, and Nicole Morris as Trix the Aviatrix. Morris, who was Shafter's Distinguished Young Woman last year, is also an acting veteran, performing in several plays.

Director Friedman said that the difference between working at the Ovation Theater and Shafter High is that at the Ovation, a lot of the players have quite a bit of experience, with a variety of players at the high school level. "We have several actors with a lot of experience, some with a little, and some of the group have not had any acting experience before joining the department," said Friedman. "At the high school, it is more of an educational experience, with the students learning how to act, as well as how to emote in different ways." 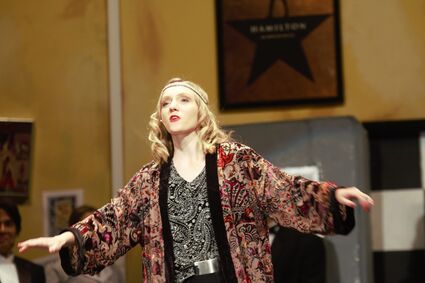 Experience in the drama department can also help students in many facets of their lives. "The theater has taught me how to deal with emotions, and it is great in learning how to express emotions, as well as recognizing emotions in others," said Bloemhof.