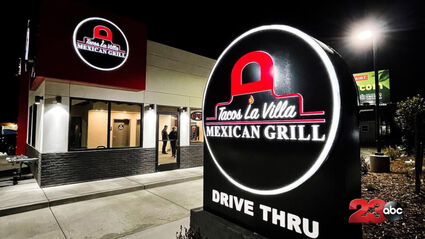 The former Del Taco should be opening soon as a Tacos La Villa.

If you have driven by Lerdo Highway and Central Valley Highway lately, you may have noticed that the Del Taco has closed its doors. The national chain eatery shut down operation recently, giving way to an up-and-coming eatery.

The city's director of business development, Bob Meadows, confirmed that the business will be reopened as a Tacos La Villas in the near future.

There are already four Tacos La Villas locations in Bakersfield that have taken over former Del Taco drive-ins.

Resident Mary Longren said that she is looking forward to the change. "I just love Tacos La Villas. Their asada fries are the best, and their burritos are awesome. There is just more of a real Mexican food vibe from their places than many others.".

Tacos La Villas are famous for Bakersfield Famous Tuesdays, pricing their tacos at 99 cents all day. Another popular item is their Hot Cheetos Burrito.

The brand resulted when a couple of dreamers, including Danny Nunez, brought tacos, burritos, tortas and a lot more to the residents of Bakersfield. They also serve fresh aguas, such as the popular horchata, jamaica, limonada and agua de pina.

Meadows mentioned that the businesses are pretty much turnkey, with the majority of the necessities already on site, so the Shafter outlet should be opening in the near future.