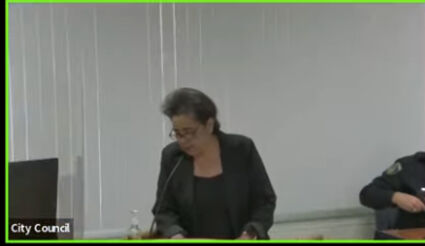 Richland Superintendent Rosa Romero spoke during Public Comment about the approval of the Resource Officer that will be on Richland School District campuses.

The Shafter City Council approved the purchase of a new Bus Shelter that will be placed at the new bus stop located at Stringham Park. This bus stop is being relocated from the City Hall area to the park. There will also be a new parking lot located at the park as well.

Previously, the Council approved a project that would build a new transit bus bay turnout on James Street, adjacent to Stringham Park. Upon completion of the project, the county of Kern has agreed to relocate its Regional Transit Bus Stop in Shafter to the Stringham Park location.

The new structure is a pre-fabricated building that can be customized.

During Public Comment of the meeting, Richland Superintendent Rosa Romero spoke to the council and thanked the council for their approval during their last meeting of the placement of a Resource Officer on the Richland campuses.

Romero said that she had brought the need to Shafter Police Chief Kevin Zimmermann and City Manager Gabriel Gonzales. Romero said that, "The need for the Resource Officer is not only because of the problems recently with some students behaviorally, but also because of the views of officers from the students"

Romero said that she was saddened recently when she saw the way her students were reacting to our Shafter Police Officers. "When my kids were growing up in Shafter, we had a Resource Officer on the campuses, and the students were taught and shown that our officers are friends and can be trusted and relied on. Today, a lot of the students run from those officers. It just saddens me. I want to get the relationship between the Shafter Police Department and the students of the Richland School District be one of trust and community."

Richland's CFO Martin Rodriguez echoed Romero's comments, saying that it hurts him to see the attitude that a lot of students have when it comes to the Police Department. He said that he is hoping that the relationship could become one of friendship and also include programs that would engage the students with the Police Department, building that trust on and off campus.

The City Council also recognized city employees to recognize Public Works Week and City Administration Week, which highlighted the outstanding contributions made to the city by the City Clerk staff that works so hard to keep the city operating in such a positive way. Public Works Department was thanked for their dedication and work to revitalize the city, its streets, and the progress made in keeping our city beautiful and functioning at a prime level.