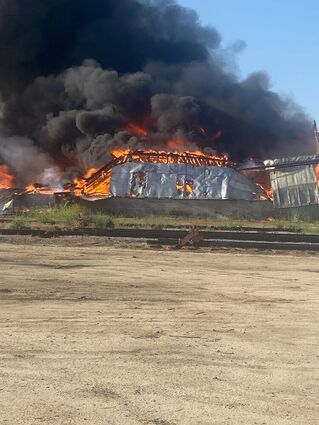 The shed on Lerdo Highway was burned down to the ground.

A potato warehouse on Lerdo Highway was burned to the ground last week, the fifth substantial fire in the city in recent months. A former Shafter fire dispatcher voiced concern that this seemed like a pattern of arson – a suggestion rejected by the Police Department.

The latest fire burned down a warehouse used to store potatoes right across the roadway from Pacific Tire.

The fire was reported a little before 8 a.m. on Thursday with the Shafter Police Department and Engine 32 of the Kern County Fire Department responding. Upon arrival, officers confirmed the empty warehouse was on fire. Firefighters controlled the blaze, but not before the building was totally destroyed. No one was inside the structure.

An investigation is ongoing regarding the cause, which was undetermined as of press time.

With the number of fires in Shafter in a short amount of time, some people are wondering if there is cause for concern. Resident Lynn Yoshikawa, a former dispatcher for the Shafter Police Department posted online comments suggesting that Shafter had an arsonist "running amok" in town.

Assistant Chief of Police Diana Barnett said that while there have been a few fires in a short stretch in Shafter, they do not appear to be the work of a single person. "Lynn is no longer employed by the Shafter Police Department, so I don't know where she is getting her information, but a few of the fires do not appear to be arson," said Barnett.

She said that the recent fire at a local tax office appears to be the result of too many extension cords overloading a circuit. "The fire at the apartment complex by Don Pepes appears to be some kids that were responsible. Yes, there have been some fires in recent months, but none of them at this time have been officially deemed to be arson. We are letting the Kern County Fire Investigators do their jobs."

Barnett agreed with another post by Yoshikawa that residents should be alert and aware of their surroundings. "If they see something suspicious, they should not confront anyone if they see someone doing something unlawful. They should contact law enforcement agencies and let us take care of the situation," said Barnett.