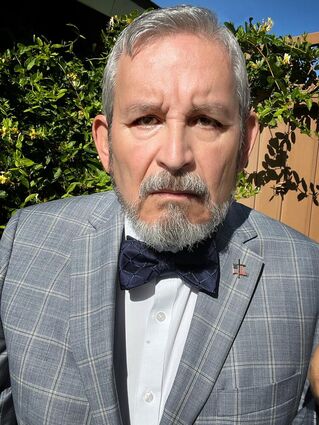 In particular, on April 28, the department arrived for a recovery of a stolen vehicle. Deputies found Joshua Anderson, age 19, of Wasco, near the vehicle and located a second stolen vehicle in the area.

"You might recognize the name from a prior presentation where I discussed Anderson had been arrested on two counts of grand theft auto," said Sergeant Shinn.

"Since being released from his previous crime, within a very short period of time has already been caught with two additional stolen vehicles."

"This shows where the state of our criminal justice system is and indicates what I have been trying to explain as far as individuals we are facing that are repeat offenders in theft and narcotics."

Also, on April 28, for the second time, Diego Emanuel Gomez, age 23, from Wasco, was arrested for an outstanding warrant in connection with an ongoing sexual assault exploitation of minors investigation.

"This individual is the same Diego Emanual Gomez from our previous meeting where I shared he had been arrested for various alike charges concerning a different victim."

On May 2, Damien Torres, a repeat offender, was arrested. "In the last six months, this is the third time presenting on him where he has been arrested for various similar charges."

"This highlights the issues in our community that law enforcement is facing on the fact that we are out here dealing unfortunately with the same individuals repeatedly because of the state of our current criminal justice system."

Mayor Gilberto Reyna commended him for the arrests that have been made. "I know it is an uphill battle because these people are just on a revolving door and keep committing the same crimes."

A comparison of statistics between March and April showed that numbers were down for the following: CFS (calls for service) from 986 to 842, total arrests from 72 to 60, citations (traffic/parking) from 96 to 42, patrol checks from 171 to 83 and narcotic related cases from 21 to 10. 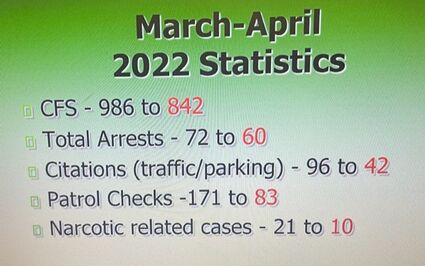 Chief Appleton from the Kern County Fire Department reported that there would be 15 new firefighters graduating. "We are behind the number of people that we have. It has been difficult to hire and keep firefighters, so we will have a new academy in June and maybe another in November.

"We are working hard to get our personnel numbers back up and are excited to see these new firefighters out in the field."

There was a brief presentation proclaiming the 53rd Annual Professional Municipal Clerks week as May 1-7.

"We extend further appreciation to our professional municipal clerks for the vital services they perform and their exemplary dedication to the communities and organizations they represent," said Mayor Reyna. "Congratulations to our clerks."

"Our clerical staff is amazing, and I don't know what I would do without them," said Councilmember Vincent R. Martinez.

Council meetings will now be held live and in-person beginning on May 17.