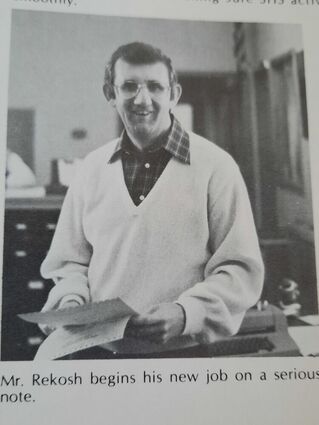 Charles Rekosh was an invaluable part of the history of Shafter High.

It was a sad day recently when the city of Shafter, especially the community at Shafter High, saw the passing of Charles Rekosh. Rekosh was an invaluable part of the history of Shafter High, contributing to the rich tradition of the school.

Rekosh began his career at SHS in 1974. Charlie and his wife decided that they would like to raise their kids in a small-town environment, so he transferred to Shafter High. Rekosh taught, coached, counseled. He eventually would serve as dean of students, assistant principal and principal. He retired from Shafter High in 2001, but that didn't end his love affair with the school. Rekosh would always have time for former students, current students and parents whose lives he had touched in such a special way.

His love of basketball and tennis was well known and led to many fruitful relationships on and off the courts.

He would go on to serve on the coaching staff at Cal State Bakersfield, giving hm a new set of students and institution. Arturo Hernandez, who attended Cal State Bakersfield, as well as two years at Shafter High, said, "He was the first person at Shafter High that I knew, and he made me laugh every day. I was so nervous when I first started, but he was the guy who helped me get to know more teachers and students. He made me feel like a General right away."

Rekosh will be missed by many here in Shafter. There are generations of students at Shafter High who went to Shafter High with him as a dean or coach, and had kids that had the chance to have him as a principal.

This special man made sure he had the experience of serving at every facet of the school, from teaching, counseling and coaching, before he took on the post of principal.

"Charlie was a true institution, a legend of Shafter High leadership and history, and truly left a legacy to never be forgotten. Charlie was the principal that hired me when I first started teaching, and even after he retired, he stayed in touch and visited when I returned to serve as principal. He had countless stories and always had words of wisdom and advice to share.

"There are parts of every mentor and leader that inspire future generations, and the number one thing I always admired about Charlie is he was direct, to the point, and you always knew where you stood with him. Nowadays we call that 'transparency,' but it was just good, down-to-earth and honest direction sprinkled with a great sense of humor."

Charles Rekosh left behind a legacy that will continue to touch lives, be they former students, friends, or Shafter Generals who will tell their kids about the special man he was.