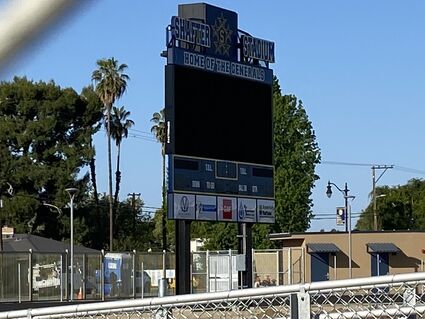 The new scoreboard will have state of the art graphics and slow-motion replay capabilities.

The Shafter High Generals will have a renovated home come this fall, with a total rebuild progressing despite a number of challenges. The new stadium project has been underway for over a year, but delays have caused the project to push back its completion dates.

According to Principal Russell Shipley, one reason for the delays is the attention to detail that the leaders of this project have. With demolition and new construction underway, they saw modifications and improvements to the already substantial design.

For one thing, they saw the need to reposition the current location of the pole vault and runway area to a more feasible location. While this sounds simple, it turned into a large redesign, which included adding a full synthetic surface to the north side of the field. This area will be fully finished with a synthetic terracotta surface and configuration for the high jump and pole vault area.

This added additional landscaping and irrigation changes to the south side of the stadium. When completed, the stadium will have a track surface and sufficient lanes to host major competitions, including regional and state competitions.

In addition, updates and changes were added to the second concession stand located on the south east side of the stadium, near the ticket booth.

Many of the other delays can be attributed to detail and making sure the stadium and overall financial investment were meeting all foreseen needs. "We wanted to make sure it wasn't 'good enough,' but perfect and great for many, many generations to come," Shipley said.

Shipley said that the goal is to have the main field ready with sod and irrigation so the class of 2022 can graduate in the new stadium. There is a contingency plan if the main field is not ready in time, though.

The stadium will not be completely done at that time and much of the final synthetic surface, track and final touches will be completed in the summer. Shipley said that there are many variables that may control or delay the completion, including supply, demand, transportation of goods, etc.

In the end, Shipley said that the stadium will be one of the nicest and most state-of-the-art stadiums throughout the county. "It will be a shining star for our Generals and our community. Even during construction we have had many visitors coming out to see the progress of the stadium because they heard rumors about how 'fancy' it was."

After playing a season as nomads, roaming from stadium to stadium for their home games, it will be a welcome sight to see Shafter's newest jewel full of fans on a Friday night.