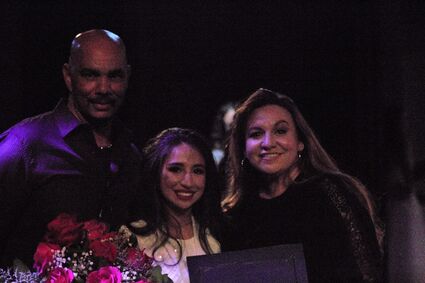 The 2021 Distinquished Young Woman, Bazaldua with her family, all smiles.

Faith Bazaldua was named the Distinguished Young Woman of Shafter for the class of 2023 on Friday night, winning out over five other young ladies to earn the title. Bazaldua is the daughter of Constance Rubio, and was sponsored by San Joaquin Roofing.

The competition, at the Ford Theater, was the return of the annual event with a full audience, with it a limited seating available last year, and the event virtual the year before that.

The evening was hosted by KGET's Maddie Jansen, who is herself a DYW alumn, Also on hand helping with the hosting duties was last year's DYW, Nicole Morris. The first alternate for the competition was Juleebeth Diaz. There were seven awards handed out on Friday night, with half of the judging already taken place before Friday night.

The Scholastic winner, who was awarded a $300 scholarship, was Cassandra Gutierrez. The first phase of the competition on event night was the Fitness phase. The girls were put through a intense fitness routine that tested their agility, endurance and overall fitness. That award went to Jessica Moreno-Bravo.

One of the most nerve-wracking phases of the program is the Talent portion of the event. This is true for the girls as well as their parents. Laura Neufeld was the winner, performing a beautiful rendition of the song "For Forever".

In the Self Expression portion, which tests the participants' grace, poise, and quick thinking, the winner was Bazaldua.

The Spirit Award, which is selected by the contestants, was awarded to two girls, with a tie in the balloting. Each winner received a $300 scholarship. Those winners were Bazaldua and Cassandra Gutierrez.

The Shafter program is one of the oldest and most supported in the state. Many businesses and individuals help the girls pursue their dream of becoming Shafter's DYW. 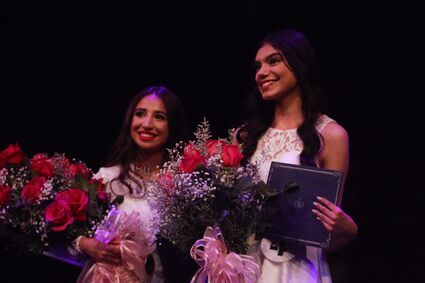 Bazaldua will now represent Shafter in a variety of events throughout the next year, including ribbon cuttings and community events, such as the Fireworks Show and the Christmas tree lighting ceremony.

Juleebeth Diaz, the first alternate, received a scholarship of $1,500. Bazaldua, with her wins in the Spirit award, Self Expression and ultimately as DYW, received $2,600 in scholarships.

The night was also a chance for last year's winner, Nicole Morris, to say goodbye and thank the city and her many supporters for their help in making this past year a special one.

Many of the participants said that the program is a life-changing experience and is a great opportunity for them to make new friends, build their self-confidence and self-esteem.