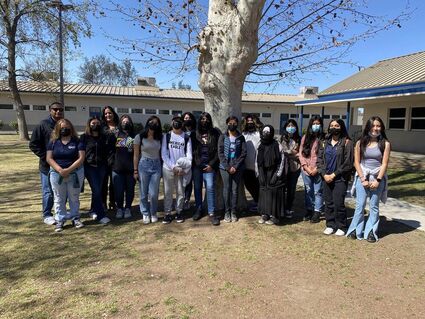 The students heard from two special speakers with inspirational messages..

Richland students were able to attend the 22nd annual Leaders in Life Conference, held at the Mechanics Bank Arena. The event, which was not held last year because of the pandemic, returned in a condensed version, with the conference a little smaller but still full of valuable speeches, information and inspiration for the future leaders of Kern County.

The conference picked up Thursday where it left off before the pandemic, inspiring and guiding students from across Kern County.

The event used presentations big and small to deliver on a variety of topics, from becoming a professional athlete to the consequences of substance abuse.

The first inspirational speaker to take the stage was pop singer and television personality Jessie Funk, who works as a therapist at a residential drug treatment facility for teen boys.

She told about a 13-year-old girl she met while helping build a school in rural Kenya. The girl, a natural leader named Cindy, committed herself to learning to read and write. She shared plans to earn a psychology degree and become a family therapist.

What Cindy hadn't shared, as Funk learned from others, was that this girl had been orphaned and abandoned as a child, starved and abused by relatives. She had also been infected with AIDS and knew she wouldn't live long. (She ended up dying at age 16.)

But nothing slowed Cindy down. She had taught herself to cry with abandon when necessary, escape to a remote place and scream if she had to, and frequently stand in front of a mirror telling herself she was strong and valuable.

Cindy's medicine was helping the other children in her village learn their lessons in the new school. Funk said that's true resilience.

"Resilience is a discipline," she said. "No matter what happens, we know we can get through something."

"You have your life to worry about. You have other people's lives to worry about," Kern County Deputy Public Defender Sunny Gallo said.

A separate session, "Understanding Addiction," was presented entirely by Melissa Kelly, a Bakersfield licensed clinical social worker who explained how chemical dependence, and even video game addiction, can "legitimately hijack" a human brain.

She took her young audience through risk factors and the typical progression of addiction as experimentation leads to regular use and then dependence.

People can overcome it, she said, usually by leaning on close friends and family members, and becoming immersed in a sober social network.

Twenty-eight schools took part in Thursday's conference, down about half from the pre-pandemic total. The event was limited to 500 students, or about a quarter of attendance before COVID-19. 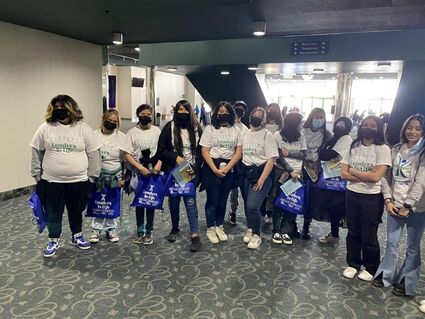 The event was held at the Mechanics Bank Arena in Bakersfield.

The Shafter contingent listened to Cindy's story of hope and inspiration then got to hear the message from the keynote speaker, author John Gaines. Students walked away with many experiences and opportunities to network with other students and the community.

Two key messages from the keynote speakers, the first speaker left students with this message, "Resilience is a discipline," she said. "No matter what happens, we know we can get through something."

Author John Gaines told the Shafter students of his time as a young man with a dream of playing running back on a championship college football team. His primary message, emphasized in a series of call-and-response sessions, was to begin each day with a "great thought," and then hold onto its truth as a source of power.