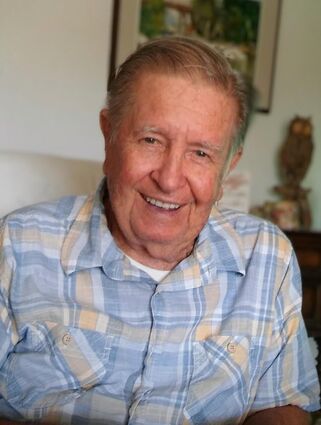 William was born on July 10, 1930 in Council Hill, Oklahoma. Bill moved from Muskogee, Oklahoma to Bakersfield with his family of nine brothers and sisters and parents Albert and Lela Leslie around 1944. Bill had fond memories of working as a cashier at a local theater when he was young. While attending Bakersfield High School he began dating the sister of his best friend's girlfriend. These young couples eventually became Frank and Bernadine Hartline and Bill and Mary Jean Leslie. Bill enlisted in the Army and in 1949 was sent to serve as a postal clerk in occupied Japan during the Korean War. After he returned home in 1952 he married Mary Jean and had two children. He began a long career with the Postal service.

Bill enjoyed time with family on vacations to the mountains and his hobbies of golf and playing pool on his snooker table with friends and later growing and selling sweet watermelons at their farm. After his retirement from the Postal Service in 1986, last serving as postmaster at the Shafter Post Office, he began a very active retirement working on his "rock farm" and with the Kern County Gem and Mineral Society traveling with the group. He was known throughout his life for his sense of humor, his caring nature and his lifelong loving commitment to his wife of 70 years, Mary Jean.

Bill is survived by his wife, Mary Jean Heitkotter Leslie, daughter, Judy Leslie-Gannon (Randall) and their son Tim Leslie, seven grandchildren, three great grandchildren and a great number of extended family members and friends. A funeral Service for William will be held on Thursday, March 31, 2022 from 9 to 10 a.m. at Hillcrest Memorial Park,9101 Kern Canyon Road, Bakersfield, California, 93306, followed by a graveside service from 10 a.m. to 11 a.m.