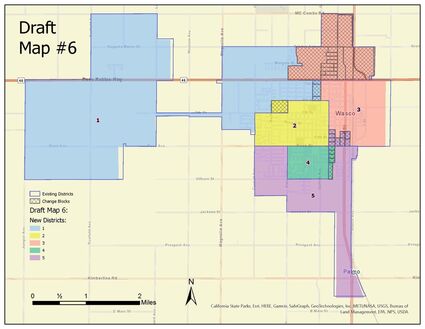 The City Council held a public hearing to address the redistricting maps and, after no public comment, map 6 was approved unanimously to move forward.

Redistricting was necessary because an analysis of the city's current district boundaries, adjusted for the 2020 data, shows the districts are no longer population balanced.

By law, the city must hold at least four public hearings that allow community members to provide input on the drawing of the district maps. This was the third of those meetings.

At the previous hearing, the city's redistricting consultant, Flo Analytics, introduced five draft maps and informed the council that a sixth map was submitted after the March 17 deadline. The council accepted all six and narrowed the choices down to three, including maps number 4, 5 and 6.

During this meeting, Flo Analytics presented draft maps 4, 5 and 6 with accompanying summary statistics for the council's and public's consideration.

Kent Martin, of Flo Analytics, said although there have not been any public comments at the public meetings so far, the online portal linked to the City of Wasco's website has had much traffic, with over 1,000 views as of last week.

"The word is getting out there to folks in the community and they are taking a look at the process through this portal," said Martin.

The final map will uphold redistricting principles: districts must be population balanced, contiguous, compliant with local, state and federal laws, including the federal Voting Rights Act (1995).

Districts should be as compact as possible, preserve communities of mutual interest and preserve the use of existing administrative and natural boundaries.

"Every map presented tonight has solid elements of these principles, and population balance deviation is the number one criteria that needs to occur," said Martin.

Population balance is determined by measuring the spread, or deviation, between the least populated district and the greatest populated district. Deviations of 10% or less are generally considered acceptable under the U.S. Supreme Court rulings on equal protection.

"If nothing were to be done to the current district boundaries, there is an overall deviation of over 90%, which is way too high," said Martin.

District 1 has gained population, and district 3 has reduced in population. Most of the large adjustments were in these districts.

"Each draft selected for review tonight has a population deviation under 2%," said Martin.

All districts have similar demographics.

"All three of the maps that the council has chosen do very well at reducing the deviation number. Under 1.5% is excellent. None of the three chosen even come close to causing a problem with the racial equity across the different districts and the changes that have been made," said City Manager Scott Hurlbert. "I don't think there is a bad choice here. Obviously, there is a 1.5%, a 1.2% and a 1.1%. Number 6 has the lowest deviation, but I think they are pretty much equivalent."

Upon the completion of the presentation, the meeting was open to public comments. However, there were none, and the public hearing was closed.

There were also no comments from the council members, and each member selected their preferred map. It was unanimous to go with map 6 because it had the lowest deviation.

A motion was unanimously approved to introduce and waive the first reading of the amendment ordinance with the attached preferred map.

The fourth hearing will take place on April 5 to ensure that the adopted final district map 6 is submitted before April 17 to the Kern County Election Office.