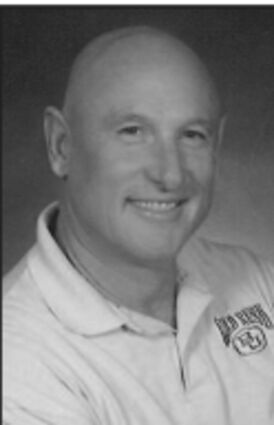 Terry Lewis was born June 4, 1958 to David and Wanda Lewis in Miami, AZ. Terry went home to be with Jesus on Feb. 11, 2022 while awaiting a liver transplant. His family moved to Bakersfield around 1966. He attended Horace Mann Elem., Sierra Jr. High and East Bakersfield High graduating in 1976.

Terry worked for the Forest Service the summer of 1976. He then went to work for Aaron Lumber Co. in the truss yard. He met his wife, Joni Handel, in April of 1977 cruising Chester Ave. They married on Dec. 30, 1978. They had four children: Nathan, Jordan, Miranda and Alyssa. Terry continued his career in the roof truss business working for Bakersfield Sandstone Truss Co. from 1987-2009. This was his dream job and he thoroughly enjoyed it. His last job was as a dispatcher for American Refuse from 2012 to October 2021 when he had to retire because of health problems. He also loved this job and his co-workers who were like a second family to him.

Terry loved sports of all kinds. He was an athlete growing up. He played Babe Ruth baseball. When he was in high school he participated in baseball, wrestling, cross country and track. He was a very talented runner. In his adult life he ran many marathons. He was very proud to have qualified and ran 2 Boston marathons. He also golfed for many years in his adulthood. Terry's greatest love was coaching. He coached his own children in recreation sports. He started the Shafter Striders X-country team. He also coached Babe Ruth baseball for a few years. He coached at Shafter High for over 20 years. He started out at Track & Field, then added X-Country and Girls JV Basketball. He loved his athletes like they were his own children. He also loved BBQing for the many fundraisers for his sports teams. A big highlight in his life was taking his Dad to the World Series when the Angels played the Giants in 2002. They were both devoted Angels fans.

Terry accepted Jesus as his Savior when he was in high school. Terry loved his church family and attended Valley Bible Church in Shafter for over 40 years. He served his church in many different ways. He was a Sunday School teacher for over 20 years, a bus driver, AWANA leader, deacon and had "Cooking with Terry" with the youth group.

Terry had many hobbies. He loved fishing, hunting, camping, cooking and BBQing. His favorite place in the world was Shaver Lake. He looked forward to his camping and fishing trips with his brother-in-law and best friend, Tom. They both had quite a few fishing stories to tell! Terry also loved going out shooting birds, rabbits, coyotes and squirrels. Terry loved cooking and BBQing for his family and friends.

Terry loved his family dearly. He was a great husband, father and grandpa. He was a hard worker and good provider for his family. He spent time with his children while coaching them all in their growing up years. Terry gave good advice to his children. That also includes his athletes and friends! Terry had a special place in his heart for his 15 grandchildren. He had a lot of love to go around!

Terry was most definitely a people person, he didn't know a stranger. He had a great sense of humor and pulled pranks on people quite often. He loved being the center of attention he was a lot of the time! Terry will be greatly missed by his family, friends, co-workers and athletes.

Terry is preceded in death by his parents, mother-in-law, Mickey Handel and grandson, Darren Johnson. He is survived by his sisters Leatha Lewis, Judy(Keith)Taylor and Esther(Brian)Archuleta. His wife, Joni of 43 years. His children Nathan(Maritza), Jordan(DeLisa), Miranda(Nick)Hightower and Alyssa(Andrew)Flores. His father-in-law and mother-in-law Glenn and Beverly Handel. His grandchildren: Vada, Valerie and Layla Lewis; Vivian, Grace and Christian Lewis; Nadia, Axel, Corbin and Hendrix Hightower; and Caleb, Logan, Nolan and Riley Flores. Terry's first great grandchild, a boy, is due in June. He is also survived by sisters-in-law: Lisa(Robert)Nunez, Cindy(Tom)Velasquez, Elke(Nick)Speliopoulos, Cari DiMaggio and Pamela(Greg)Hogan. And many nephews and nieces.

Terry's Celebration of Life will be held March 19 at 10 a.m. at Valley Bible Church, 350 Pine, Shafter, CA 93263. In lieu of flowers, donations can be made to Valley Bible Church in Shafter or to the Shafter High X-Country/Track fund in Terry's memory.