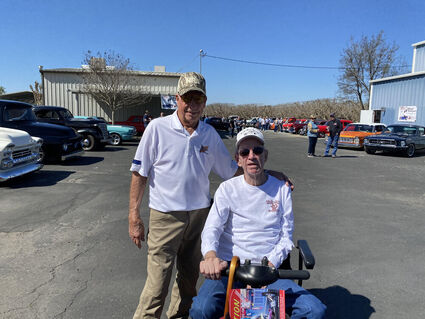 Don Mettler and Freeman Nixon were the hosts of the event this year.

The event was held in honor of Freeman Nixon, a longtime Shafter resident and car aficionado.

Held at Don Mettler's place on Mannel Avenue, the show included a number of cars that have cruised the Shafter streets for over five decades.

Ruby Hickman, who has been involved in local car shows for years, was in attendance with her 1935 Ford truck. Hickman said she has won several best in show awards with her truck, and she never gets tired of showing her off.

"I have been all over the place with it, and we love going to these shows," said Hickman.

Mettler had a number of his racing engines on display, with the souped up motors able to generate an enormous amount of horsepower. Among the attendees were Mayor Cathy Prout, car enthusiast Don Loveless, Randy Toews, and a number of members of different car clubs from the area, including the Classic Dreams and the Old Farts Car Club.

A group of people have taken turns over the years holding the car show, hosting the event at different locations. A few years ago, the event was held at Don Loveless's place, with over 70 vehicles on display. 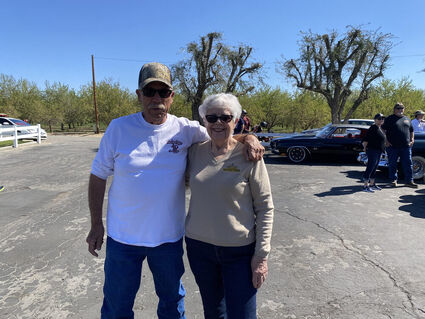 Nixon and Mettler have been a major part of the local car scene for decades, getting their start when they were youngsters, looking up at the local Counts Car Club and its members as movie stars.

"We thought those guys were it, and we wanted to be them so bad. They already had great cars, something that we were wanting to do," said Nixon.

Among the original members of the Counts were Jon Johnston and Kenny Marchman.

"I remember when a member of the Counts took his car over to Famosa and was beating the pants off of the Bakersfield guys, when they didn't care for a small town hick coming over and taking their spotlight. They weren't going to give him his trophy, until Marchman threatened to take on any of them that would stand in their way. They gave him his trophy," said Nixon.