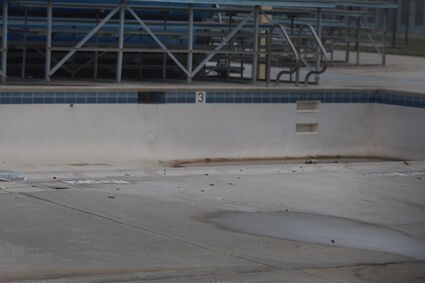 The Shafter Aquatic Center will be one of the beneficiaries of the Clean California grant.

The city of Shafter is receiving a grant from the state of California that will mean a new life for the Shafter Aquatic Center, as well as improvements to its parks in the city.

The Clean California grant, which the city applied for at the end of 2021, will give the city assistance in getting the Shafter Pool back in working order.

The pool and Aquatic Center has been uninhabitable for the past two years, with the pool being drained and suffering damage, as well as to the surrounding landscaping and buildings.

The Shafter Recreation District ended its agreement with the city, in which the recreation department operated the pool, including its maintenance, booking, and staffing. With the agreement ended, the city had no resources to operate the pool, forcing the city to abandon the facility until an agreement could be reached on future plans for the building.

The community voiced their concerns, with residents speaking at City Council meetings about the importance of the pool and the damage the absence of the pool had caused. The high school team had no place to practice, as well as the local swim club, the Shafter Stingrays, forcing parents to either have their kids not able to swim or to swim for different clubs.

After discussions, an agreement could not be reached, with the site looking more abandoned by the month, making the future of the pool to be in danger.

The grant is worth almost $5 million, with a projected $2.4 million of the money to be used for the improvements on the pool.

According to Public Works Director Michael James, the money will be used to get the pool operational again. This means improvements to the pool itself, surfacing, getting the children's and adult pools open again.

"The surrounding buildings and landscaping will not be included in the grant money. It will be to get the pool operational again, and perhaps getting the pool area equipped for ADA compliance," James said.

"I can't see the city not having a pool. I have so many great memories of the Shafter Pool. I would be heartbroken if my kids didn't get a chance to have these same great memories," said Kelly Rhinehold, who said his kids are looking forward to getting a chance to swim in the rehabbed pool.

In addition to the Shafter Aquatic Center, the grant money will be used for improvements on the city's existing parks.

James said a little over $1 million dollars will be spent on a James Street improvement project. This means a new parking lot at Stringham Park, new lighting and decorations on the sidewalks and streets from Lerdo Highway and Shafter Avenue. It will also include a shaded seating area at Stringham Park.

The existing Skate Park for Shafter, off of Euclid Avenue near the Shafter Youth Center will be getting $770,000 for improvements to the facility. Originally, the equipment at the Skate Park were supposed to be temporary until permanent equipment could be installed. The site didn't get the necessary improvements and has suffered a similar fate as the Shafter pool, with the area going unkempt for a long period of time. The money will be used to install new equipment at the park, as well as lighting.

There is not a firm timeline for the projects at the moment. There will be more specific details as they become available.