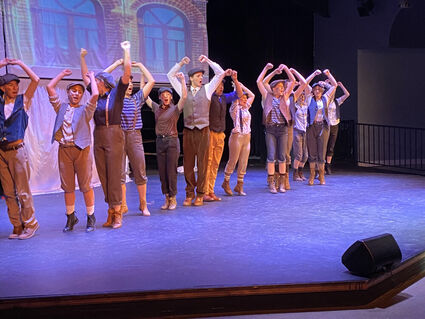 The production was full of challenging numbers.

The group, led by Director Chad Givens, most of the actors were learning on the job as far as the dancing goes.

"Out of the entire company, there were two or three kids who are dancers. The rest of the cast were learning to dance as the production went on," said Givens.

Newsies is based on a real story in which a strike took place with a number of newspaper deliverers and sellers, or "newsies," when publishing magnate Joe Pulitzer raised the price of the papers that the newsies buy to sell to the public.

Led by Jack Kelly, a group including his best friend Crutchie, played by Mark Scialabba, brothers Davey and Les, played by David Bloemhof and Micah Neufeld respectively, and a host of friends went up against the powerful Pulitzer. Kelly caught the attention of a young reporter, Pulitzer's daughter Katherine, who was portrayed by Kristen McGuire. Katherine wrote about the struggle and was then blackballed by the newspaper industry. She joined up with the resistance group and together they took on the giants and defeated them with a little help from then Governor Teddy Roosevelt. 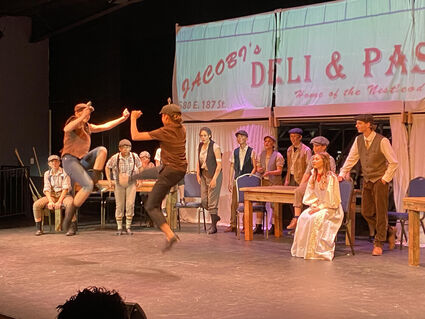 Kelly was played by Jesus Jaime, who showed a great range and had terrific comedic timing as well. This could be said for the entire cast as they portrayed a group of New York kids, complete with authentic accents, especially the hilarious Josclyn Martinez.

The entire cast sang, danced, both tap and a style that is some ballet moves mixed in with bold, athletic moves. It was an expertly choreographed show, led by choreographer Roya Eubanks. The set was also a highlight, with rooftops depicted, as well as an office and town square.

A musical also depends on some great music, and this production did not disappoint. A fantastic band made up of trumpets, piano, drums, bass, trombones, saxes, flutes and clarinets, the music kept the production in tune and on time.