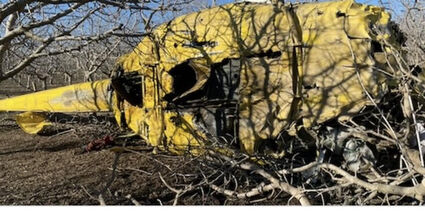 Steve Wilson was spraying at night in the Coalinga area when the crash occurred.

Steve Wilson, 53, of Shafter, died when his helicopter crashed in orchards in the Coalinga area.

At around 3 a.m. last Tuesday night, the Fresno County Sheriff's Office received a call from American West Aviation, a crop dusting company, about a missing pilot of one of their helicopters. Deputies responded to the area known as Five Points, in the Coalinga area near Harris Ranch to conduct a search. At the same time, the California Highway Patrol and the company sent out airplanes of their own to search.

Shortly after, a crop dusting plane reported seeing a matching yellow helicopter down in some trees near S. Sonoma and W. Chandler avenues.

Deputies arrived and determined that it was the helicopter that they were looking for. The pilot, who was the only occupant in the aircraft, was deceased.

An investigation has been started by the Federal Aviation Administration to determine the cause of the accident.

Wilson was spraying a field at night, according to environmental regulations, which requires certain chemicals to be sprayed at night. Local farmer Stan Wilson, who was a student of Wilson's grandfather in Shafter, said that it doesn't make any sense to force this work to be done at night.

Early reports are that Wilson may have hit a power line.

Wilson grew up in Shafter and attended Shafter schools. Years ago, Wilson learned to spray crops at his father and grandfather's company, Inland Cropdusters, before becoming a flight instructor and working full time for American West Aviation, where he had been for the past 20 years. According to friends and family, Wilson loved to fly that big yellow Huey copter and had worked on perfecting the art of cropdusting.