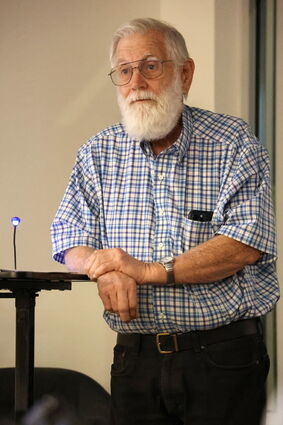 The center began a history series last Thursday night with Wilson's lecture on the life and times on Gen. Shafter.

"Shafter was a school teacher when he joined the 7th Michigan Volunteers during the Civil War. He was given the rank of lieutenant, and as an officer so distinguished himself that he was promoted to the rank of Major General of Volunteers by the end of the war."

Wilson went on to say that one of Shafter's assignments was to recruit and train Black troops, who he molded into a fine infantry force. After the war, he was mustered out of the Army, but he applied to remain and was accepted. He was granted the rank of lieutenant colonel and given command of the Black infantry, with the assignment to patrol West Texas along the Rio Grande to protect American settlements from attacks from bandits and Indians.

He led a relentless march across the Llano Estacado to the Pecos River, thus earning him the nickname "Pecos Bill."

During his long military career he also served as head of Army recruitment and on a Weapons Procurement Board in South Dakota and in Arizona, and was eventually given command of the Department of California, based in San Francisco, by which time he had been promoted to major general.

He was selected to lead a "grossly unprepared" army against Spain in the Spanish American War in 1898. Yet within a month, recruits were trained and supplies were loaded on ships for Cuba. When they arrived, they were met by a lot of rain, impassable roads, disease and poor logistics.

Teddy Roosevelt and the Rough Riders were under his command when they took San Juan Hill. That was the major skirmish of the war. Shafter proceeded with negotiations with the Spanish and demanded surrender. He outfoxed them, and they surrendered. It was a major feat, as the Spanish army outnumbered Shafter's men 24,000 to 17,000. 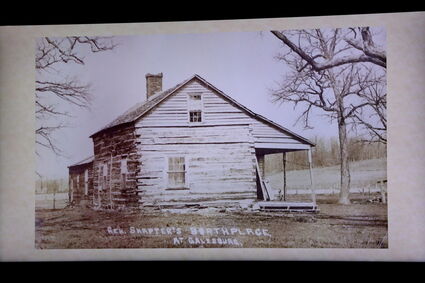 This postcard, owned by Stan Wilson, is of Shafter's birthplace

Shafter became an instant hero in America. The short war saved many lives on both sides. After his return he was a much-sought speaker for many celebration events, and his picture appeared in media and advertising. And so, in 1898, when the SF&SJ Valley Railroad was completed to Bakersfield, Henry Jastro of the Kern County Land Co. suggested his name be used for the station north of Bakersfield.

Shafter was a very colorful character, and his personality was not unlike the parts that John Wayne played in many of his westerns.

Wilson will be presenting a different lecture each month at the Shafter Learning Center. The next lecture will be March 10, "A Review of Shafter History Through the Centennial Playing Card Deck."

On April 14, the presentation will be "The German Prisoner of War Camp in Shafter during WWII," with "Shafter, the Potato Capital of the World," following on May 12.