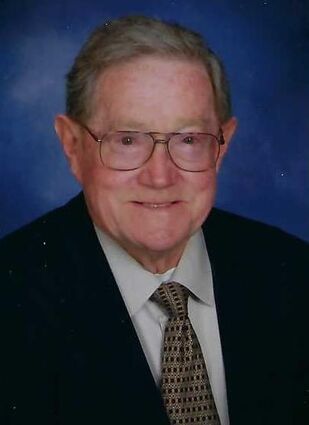 He was born on June 3, 1935, in Manchester, Michigan to Edward and Dorothy (Strack) Kirk, the eldest of five children. Joe graduated from Manchester High School, class of 1953 with all grade levels held in the same building. At age 18 he became a charter member of the Knights of Columbus. He attended Michigan State University and served two years in the Marine Corps taking basic training at Camp Pendleton, California. Liking California he returned in 1959, and after an extensive training program joined State Farm Insurance Company, settling in Shafter, California. He served 36 years as an agent. As a "Good Neighbor" Joe became an active member of the community serving as a member of Lions Club, Rotary International, Shafter Historical Society and Shafter Chamber of Commerce. He was an active member of St. Theresa Catholic Church, the Marine Corps League and life member of Veterans of Foreign Wars and Honorary Life Member of Knights of Columbus. He was a member of the "25 Gallon" club at Houchin Blood Bank, Bakersfield, CA. He hosted an annual Fourth of July celebration with a themed flag ceremony. His hobby of creating, recycling, rebuilding bicycles-any cycle- led to the Shafter Bike Club whose four generation membership aged 2 to more than 80, enjoyed participating in local area parades and then by invitation the Doodah Parade in Pasadena, CA. Most of the more than 100, individually designed bikes were donated to Boys Town, Omaha Nebraska.

After retirement, Joe and his wife Gretchen resettled in 2008 at Wamplers Lake, Brooklyn, MI and enjoyed many family gatherings. In 2019 they moved to the Woodlands, an independent living residence in Toledo, Ohio.

The family extends their heartfelt thanks to Otterbein Woodlands staff, Sunset House and Ashanti Hospice for their help and loving care.

Remembrance is a form of meeting---Kahlil Gibran