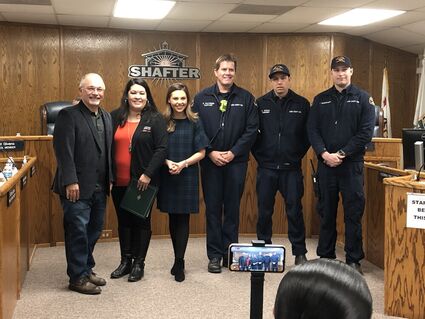 Safe Surrender Month was recognized by the City Council.

The city has proclaimed February as Safe Surrender month.

The campaign has helped the safe surrender of 90 babies in Kern County.

The Safely Surrender Baby Law responds to the situation of newborn infant deaths due to abandonment in unsafe locations. First signed into law in January 2001, the Safely Surrendered Baby Law became permanent in January 2006. The law's intent is to save the lives of newborn infants at risk of abandonment by encouraging parents or persons with lawful custody to safely surrender the infant within 72 hours of birth, with no questions asked.

A mother in New Mexico recently was videotaped throwing her newborn son into a dumpster in the back of a shopping mall. Fortunately, bystanders discovered the newborn boy and called authorities. The baby survived the ordeal. If the mother would have been aware of the Safely Surrender Law, she would have been able to safely hand the baby over.

In Kern County, a newborn baby can be safely surrendered into the hands of any hospital emergency room or Fire Station staff. The Safely Surrender Baby Coalition, under the coordination of the Department of Human Services, works to educate all Kern County residents about this law.