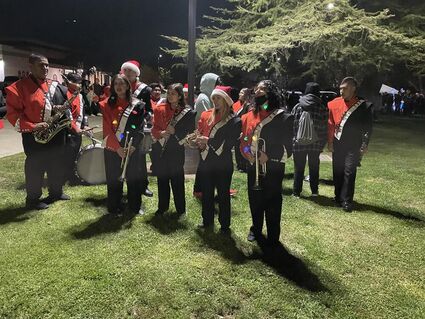 The community celebrated the holidays and threw a huge party in front of the Wasco High auditorium Saturday, ending the night with the annual Christmas tree lighting.

The lighting of the Christmas tree has been an annual event in the city, even in 2020 during the pandemic.

"Lighting up the tree in front of Wasco High has been a dream for years," Sharon Sharp said. "We are very grateful to Wasco High administration and the board for allowing it to become a reality for our community."

The event was broken up into three parts. The first part was the row of food booths that lined part of 7th Street and that began at 4 p.m. The second part was the parade, which began at 6 p.m. and the last part was the lighting of the Christmas tree in front of Wasco High School, which happened at 7:15 p.m.

Excitement was felt in the air as most attendees donned their warmest winter coats, knitted caps and gloves. Council member Alex Garcia wore heated gloves and heated pants. He wasn't bothered too much by the cold except he said his nose was very cold without the wearing of a mask in the outdoors.

Attendees were treated to a variety of food vendors. Carmel Corn, Strawberry Lemonade and a lot of other food was available for sale. Camilo Vasquez baked a variety of his homemade goods such as croissants, homemade vegan or Keto items. 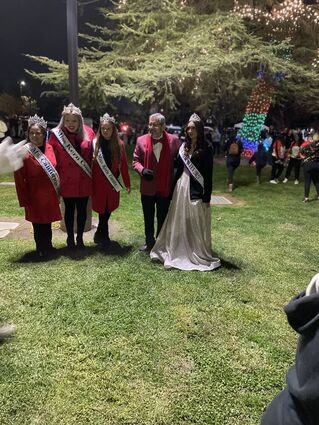 Standing in the cold nighttime air, the parade was a perfect break from eating. Both sides of the street were filled with oldsters and youngsters of all ages ready to hunker down and watch the bright lights of Christmas fill the street. Everyone wanted a view of Santa, who showed up in his sleigh. Before and during the evening, several vendors walked the street selling brightly lit balloons and decorations.

After the parade, Thamar Garza led everyone in the singing of Christmas carols.

Once the parade was over, attendees made their way to the front of the high school where the traditional Christmas tree lighting took place.

Superintendent of the Wasco High School District Rob Cobb along with Mayor Gilberto Reyna, Orange Heart members and Rose Festival Committee members assisted in the coordination of the lighting of the tree.

"It was great to see our community come together by participating and supporting Wasco's Christmas Parade and Tree Lighting Ceremony," Council member Tilo Cortez said. "I have no doubt this event will continue to grow and create lasting memories for us all."