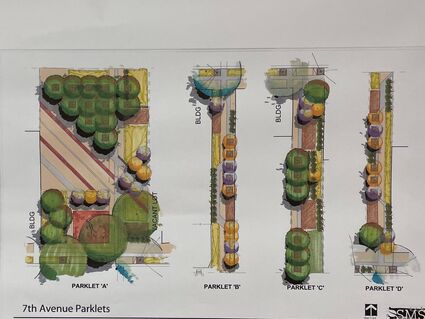 The city held a community meeting on Wednesday, Nov. 10 to present the results of a recent online streetscape survey.

Concept design renderings were taped to the walls around the room so attendees could view the different ideas.

The renderings included parklets - small parks and public spaces) - along with several ideas for optional elements that could be included in those spaces.

The survey was for the beautification of downtown 7th Street and the park located at the southeast corner of 7th and F Street. The city would like to recognize local veterans and rename the park, Veterans Park.

There were several ideas generated from the survey and concept designs that workshop attendees had the opportunity to comment on. Some of the ideas included creating active spaces for fitness, or games, creating spaces for public art and community gathering and designating areas for outdoor dining.

The concept designs presented at the meeting were laid out to enhance the aesthetics and function of the downtown 7th Street corridor, while being water efficient and simple to maintain.

Under the exhibits are the following descriptions:

Exhibit 1: The concept plans for 7th Street Park include calling it Veterans Memorial Park, flagpoles and new LED sign at the corner. The clock tower may be relocated to the park. The park would include a small park area that includes turf "sniff zone" and dog drinking fountain with doggy bag pickup stations and park mulch area with dog agility equipment. Picnic tables and seating provided and Veteran's turf area could be a demonstration garden rather than turf.

Exhibit #2. (Optional Element) Parklet A. The blue square area could contain a youth-friendly element like a swing or other small play equipment. The smaller square areas could be a place for a small business kiosk and/or seating/eating areas. 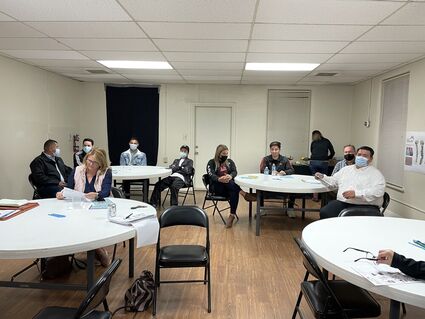 A community meeting on Nov. 10 looked at the results of a recent online streetscape survey.

Exhibit #3. The concept plans for 7th Street Park highlights the following: Trees are strategically placed so they are not directly in front of any business doorways. Sidewalk paving treatment is strategically designed to be low maintenance and to guide pedestrians and shoppers to the front doors of businesses. Informal narrow seat walls will be scattered throughout. These are not benches and will not lend themselves to long-term loitering or sleeping.