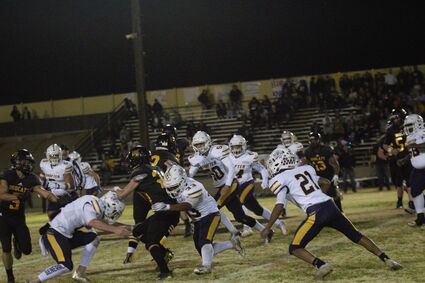 Shafter makes a stop on defense.

The Shafter Generals traveled to Boron on Friday night to take on the Bobcats with a trip to the Division V semifinals on the line. Shafter gave the Bobcats a battle but Boron was too dominant when it counted to beat the Generals 50-33.

The Wasco Tigers also lost in their playoff game to Frontier this past week.

With Shafter trying to get back in the game, quarterback Tyson Dozhier led the Shafter offense on a long drive at the end of the second quarter, with Dozhier scoring for the Generals, cutting the lead to 20-6.

But, as would prove to be the case all evening, every time the Generals would score to close the gap, Boron scored in under two minutes to close out the half with a 28-6 lead. 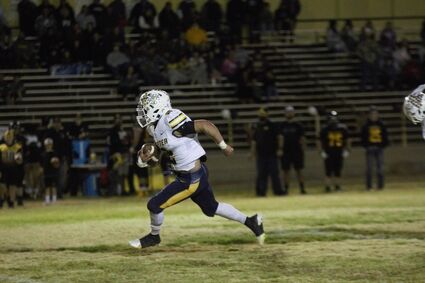 Elijah Lucero takes off on a big run.

The Generals started the second half on a high note, driving the length of the field. Dozhier threw a touchdown pass to Armando Loera, closing the gap to 28-14. The Shafter defense then gave the offense an opportunity with a fumble recovery on their next possession, giving the ball back to Dozhier and company.

Unfortunately, the drive ended when Dozhier attempted a pass into the endzone, but was intercepted, giving the Bobcats the ball at the 20 yard line.

The Shafter offense had a moment minutes later when the Generals were once again knocking on the door, trying to get into the endzone from inside the Bobcats' 10 yard line. Dozhier was intercepted again, giving the ball to the Bobcats. The Bobcats scored on the next possession, widening their lead.

The fourth quarter saw the Generals trying to climb out of that hole, only to have Boron match them score for score, as the Generals defense was not able to stop the Bobcats.