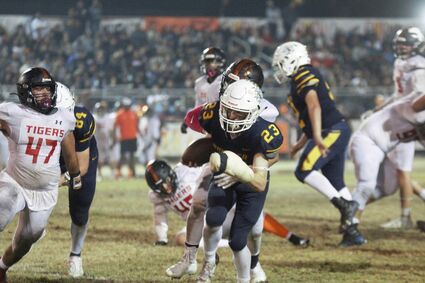 In the 94th battle between the Shafter Generals and the Wasco Tigers, Wasco used a hurry-up offense that eventually battered the injury-riddled Generals into submission with a 46-20 win. The game was a hard-fought one that saw the Generals stay in the game up to the very end, battling their way back each time they fell behind.

Shafter spotted the Tigers a 16-0 lead just minutes into the game. Wasco scored on their first drive of the game on a 9 yard run, followed by the recovery of an onside kick by the Tigers. Wasco then scored again on a long pass play, putting the Generals in a hole early. The game was played at Centennial High School, the Generals spending the season on the road while their new stadium is being renovated.

The Generals offense answered with a drive of their own, helped by a key third down play by Koa Rhodes and a scramble by quarterback Darren Sundgren. Sundgren was coming off a Kennedy game which saw him knocked out of the contest in the second half. Sundgren didn't run nearly as much as in previous contests, most probably a precautionary measure to prevent further injury.

But, when he did run, Sundgren ran effectively for a couple of first downs. But, the Tigers used a no-huddle offense that kept the Generals' defense on the field for long periods of time, assisted by a couple of pass plays, intermingled with a slew of misdirection runs.

The Tigers made the score 24-6 when they completed a pass play that gave them first and goal from the 2 yard line. The Tigers took the ball in for the score. The lead was stretched further after Wasco recovered their second onside kick of the contest and scored 10 plays later on a 1 yard run. Shafter got some momentum going into halftime when they drove the ball 54 yards on 11 plays to close the gap to 32-12. 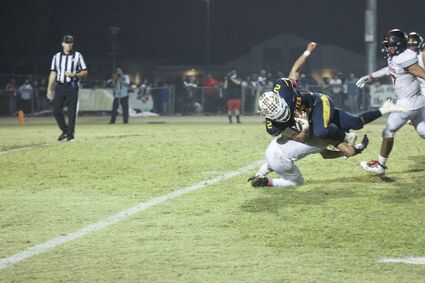 Shafter kept that momentum in the second half as they took the ball 70 yards in two plays to begin the second half, scoring on an Elijah Lucero run to make the score 32-20. Unfortunately, the Generals couldn't mount another scoring drive, losing two fumbles in the third quarter that forced the Generals' defense to spend a lot of time on the field trying to hold off the Tigers. Wasco score midway through second half to widen the lead. Wasco capped off the scoring with a touchdown run with under two minutes to play.

The win gave the Tigers the outright SSL championship. But, the victory may be bittersweet, as the Tigers were rewarded with a bump up in the Central Section division placings, moved to Division II and getting a #14 seed, which means a return visit to Centennial High School, this time playing the Golden Hawks in the first round of the playoffs.

Shafter received the #5 seed in Division V and will play Riverdale High School on Friday night in the first round.